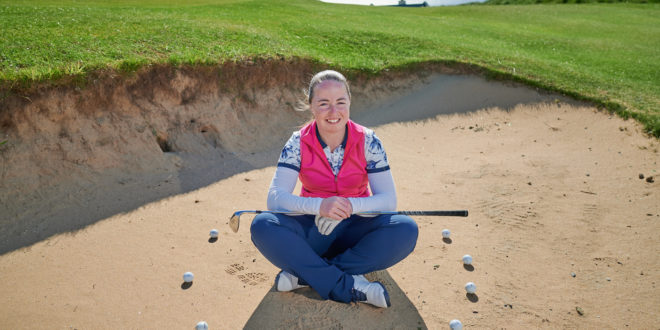 When the golf courses around the county reopen their doors next week, chances are Sinead Sexton will be one of the first in line to tee off.

The Spanish Point native has a better excuse than most for wanting to get back onto the first tee though as she recently began her studies to become a golf professional.

“I am doing it through the Ladies PGA and it allows you to do it all online through quizzes and assignments. There is also a in-person seminar in Florida in August so we will have to just wait and see if that goes ahead. If I can’t get there, it can be put off until December and that will complete Level One. There are three levels which are worked like three college semesters and the good thing about it is that you can still be working while you are doing it. It can tie in with what you are doing too so if I am giving lessons you can take notes from that or do your instructional videos to help indentify how players can improve. It can be an interesting dynamic to try and figure out the best way to communicate with the different levels of golfers, as you will meet people who are playing with 40 years and then also have to tailor plans for those who are just starting out. It can really vary because people who have been playing for some time will have developed their own habits whereas you can help a beginner to have the correct habits right from the start” she explained.

Since completed an MA in Scotland in 2017, Sexton has been spending the winter months working at a high end country club in Florida to further her career. This year’s stint was cut short due to the outbreak of COVID-19 as she was forced into coming home six weeks early. The prospect of getting back onto the course in Spanish Point or Lahinch was also off the table with the course closures announced as she prepared to come home, meaning one of the longest periods since she has had a chance to play.

The love for the game was fostered at an early age with her brothers and cousins all playing at the nearby course just a stone’s throw from her home in Spanish Point. She credits her primary school teacher Tanya Carroll with developing that interest even further as she got a programme going aimed at encouraging girls to take up the sport.

“It was great to have that outlet and particularly because it was all girls who were playing. It developed from there and I went to Lahinch to play in an open competition and I met Annie O’Brien who was in charge of the junior section at the time. She asked my mother if I would be interested in joining as a member because the club was open at the time so I was really lucky to get that break. There is a brilliant junior programme in Lahinch with a really high standard of golf so it was great to get that chance” she said.

It is not just golf that Sinead excelled in as she also played with the Clare ladies senior football side as her fledgling career began to pick up pace. She was also selected on the Munster Ladies golf team but with the Leaving Cert exams looming, a particularly busy Saturday afternoon brought her to the realisation that there simply were not enough hours in the day to keep it all going.

“I was playing in the Senior Cup All-Ireland with Lahinch in Cork on a Saturday morning and on the same day I was also due to be playing with the Clare ladies footballers in Offaly that afternoon. We lost the golf match and straight away I was texting David O’Brien, who was over the Clare team, to let him know I was on the way to them. My parents drove my from Cork to Offaly for the game and I remember coming home in the car that evening thinking that something would have to give. I was in fifth year in school at the time and with the Leaving Cert coming up there would just not be time for it all. I really enjoy the team element of football but I made the decision to concentrate on my golf and I think it was the right decision” she reflected.

Golf would prove to be something which continued opening doors for Sinead and after she completed her Leaving Cert, she was awarded a scholarship for her BA in Business and Irish at Maynooth University under the Paddy Harrington programme. She was chosen on the Irish Ladies team at the age of 18 while also having the opportunity to play in the World University Games in South Korea which she describes as being a major highlight.

“The World University Games are a huge sporting event and are second only in scale to the Olympics. We had a boys and a girl’s team that travelled there and it was just a great experience. It was really an eye opener to see how the likes of the athletes involved in swimming and athletics prepare for big sporting events and it was just something so different to what we were normally used to” she said.

Once her time in Maynooth was over, Sinead took time out to consider what the future would hold. She worked in Lahinch for a time before making the decision to head to Stirling in Scotland to undertake an MA degree. That experience would lead to her hearing about a work programme in Florida which immediately peaked her interest.

“A girl I knew through golf had already been working there and the country clubs over there were looking for temporary workers for the winter season which runs from October to May. I decided I would give it a go and it really was like stepping into another world. There are 3000 members in the club I work in and we were told from the minute we go in there that we are on stage all the time. The members expect so much from you because they pay huge money to be there. I started working my way up the ladder there in the golf side of things between the pro shop and being out on course. I had never really thought about getting involved in the teaching side of things because I was still holding on to that amateur status” she noted.

The desire to hold off on making the step up to the professional ranks was driven in part by a box that was still unticked with the team where it all began.

“I always had that competitive nature and we were building a good team in Lahinch which I was on since I was 16. We had had some success at Munster level but we had never won the All-Ireland so no matter what sport you play, winning a national title is always a goal. I came back from Florida after the 2017-2018 season and we were lucky enough to win the All-Ireland that year and we did it back to back 12 months later. Around that same time I was also part of the Munster Interpro team that won the title for the first time in a while and we also got to travel to Hungary for the European Club trophy where we won a silver medal. The Senior Cup in Killarney was a really special moment because I had made the decision that I would be moving on from the amateur ranks so it was lovely to have all my family and teammates there for that. I knew it was time to move on and I am looking forward to what the future holds” she said.

So what will that future hold for Sinead?

“I see myself in America for the next 5-10 years and after that who knows? Home will always be home and I think I would pick up something work-wise but the problem is that the work would be quite seasonal particularly in the West of Ireland. I am the kind of person who always likes to be busy and I really thought I would struggle with this lockdown but we are getting through it. Everything in Florida is so fast-paced and you are constantly on the go for 12-14 hours a day which I enjoy. It also helps that you are working out in the heat so I think for the next while I will try to avoid the winters here at home” she smiled.