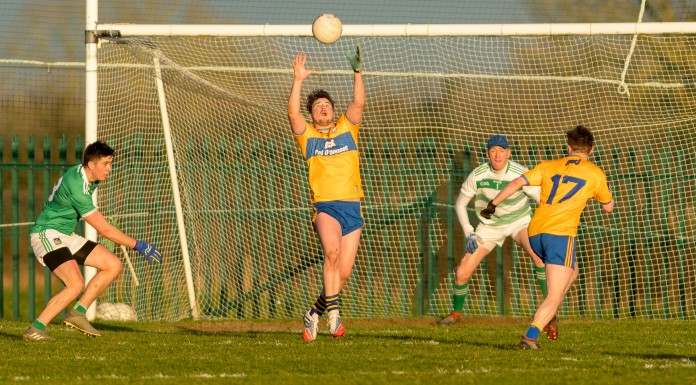 Clare's Keelan Sexton in action during the McGrath Cup loss to Limerick. Pic by Eugene McCafferty

Sexton Enjoying Being Back In Banner Squad After Summer Overseas

Sunday’s showdown with Limerick in Rathkeale marked a return to the Clare jersey for a number of players who had missed out on last year’s championship campaign, including Keelan Sexton.

The Kilmurry Ibrickane man played a vital role in Clare’s last day heroics in the National League campaign as his late goal against Tipperary in Thurles helped maintain the Banner’s status in Division Two. It would be his last act of the 2019 season, as he headed stateside for the summer meaning he missed out on Clare’s run which took them to the brink of the Super Eights.

His impact was immediate as he notched a brace of goals in their opening round defeat but feels the result was secondary to main goal of blowing off the cobwebs.

“You want to go out and win every game you play and the McGrath Cup is no different. It was a first outing for the team this year and we had a lot of new faces. We were hoping to get a win but Limerick deserve credit because they made it really tough. It was good for some of the new lads to learn a few things and get familiar with each other too but it is not the end of the world to have lost either. We were happy with some aspects of our performance but disappointed with others so we have to work on those. If we can put things right that we did wrong and repeat what we did well, then we will be fine. It is all building towards the National League and that is what the real aim is” he noted.

It will be a whole new starting 15 that takes to the field this Sunday against Waterford in Hennessey Park in Miltown as Collins continues to run the rule over his squad ahead of their showdown with Westmeath at the end of the month. Sexton says he is enjoying being back involved having taken some time away from the squad and is hoping to make up for lost time.

“Going away last summer was a decision I made myself. I was delighted to be involved for the league and it was a great last day down in Thurles to stay up. I knew it would be my last chance to do the summer away before college finished and hopefully the job I will be taking up in the future. It was my only chance to go and when I said it to Colm he was very accepting about it. Looking on during the summer while the lads were playing was tough but it is great to be back and I am looking forward to it. Hopefully we can go on to have another good league and championship campaign and bring it on another step” said the former UL Sigerson captain.

With established leaders set to be missing in 2020, Sexton says everyone will have to row in to ensure the impact of their absence is kept to a minimum.

“No matter what way you try to spin it, the likes of Gary Brennan and Jamie Malone are two quality players and they are as good as what is around. They are almost nailed on All-Star nominations every year they go out and any team would love to have them. We can only wish them luck because they are outstanding servants to Clare football and hopefully they enjoy the year out and come back to us again. We are missing Aaron Fitzgerald with the knee injury too but you have to look at it and try to get up to their standard. They left the jersey in as high a place as it has ever been and hopefully we can meet that level. That is a good standard to try to meet and that is what everyone will be trying to do. You just want to give as much to the jersey as you can and hopefully if everyone does that we will have as good a Clare team as we can possibly have” he concluded.