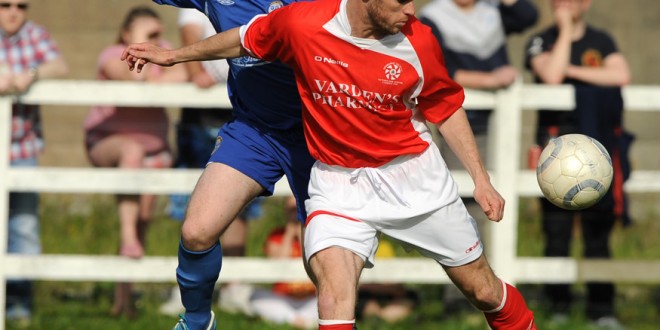 Newmarket Celtic A 3 Avenue United A 2

Newmarket are the Clare soccer cup champions for the seventh successive year but for much of this evening’s final at Frank Healy Park in Doora it looked as if they would have to settle for the runners up spot.

In the end, however, the experience that Newmarket have gained in recent seasons saw them stage a tremendous rally and an injury time goal levelled the tie at 2-2 and forced extra time.

The game was in the last minute of the extra period and fans were asking when the replay was likely when the champions struck for the winner, a score which sparked off great celebrations amongst their loyal fans

Two Mark Roche goals in a three minute spell shortly before half time gave Avenue United a 2-0 interval advantage and this was still the position at the three quarter stage.

Celtic had introduced Colin Ryan and Colin Smyth, both of whom had been omitted from their starting line up, for the second half and their presence certainly helped the team’s rally.

Smyth’s goal twenty six minutes into the second half gave Newmarket a lifeline but still Avenue looked to have one hand on the cup as they led in injury time.

Fifteen minutes into the second half Cathal Hayes came in for Paddy Purcell and ten minutes later Purcell’s fellow central defender, Colm Treacy limped off and was replaced by David O’Grady.

As the game ticked towards the 90th minute Celtic sent in Stephen Kelly who wasn’t in the starting side due to injury.

The game was in the fourth minute of ‘added time’ when Tino Nzvaura struck for the equaliser which came after some poor defending by Avenue. There was a buzz in the step of the Newmarket players as they headed to the dressing room to prepare for the extra period which they were fortunate to force on the night.

Towards the end of the second period of extra time Newmarket pressed forward in search of the winner. Avenue were reduced to ten men when Jamie Roche saw red after a foul on Eoin Hayes as the Newmarket striker headed for goal.

When David Russell cleared a Colin Smyth effort off the line a minute from the end , a replay seemed certain but there was one more chance and Colin Smith was again the player who created the opportunity and Eoin O’Brien applied the finish to spark off the celebrations for Newmarket who have also won the premier league title as attention now turns to the celebrations to mark the club’s 50th anniversary;

On an evening when Daithi O’Connell won his 8th Clare cup medal, there was some consolation for Avenue as Dylan Casey picked up the man of the match award.