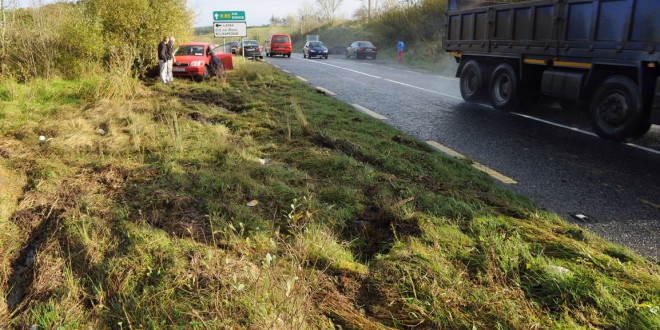 The scene near Kilnamona on Thursday last after a car carrying a mother and her two young children spun off the road. The accident is the third such incident at the same part of the road in recent weeks. Photograph by John Kelly.

A woman and her two children had a lucky escape on Thursday when the car in which they were travelling left the road at a notorious corner on the main Ennis to Ennistymon Road.

The crash, just after midday, brought to seven, the number of accidents at Ballyknock, Kilnamona in the past 11 days according to Clare County Councillor James Breen.

Councillor Breen, who lives in the area, has called for immediate action on the road to prevent further accidents.
“That is seven crashes there in 11 days. I have looked for a meeting with the National Roads Authority, about that stretch of road. I think it is very, very serious and I am hoping the NRA will afford me a meeting. They haven’t come back to me yet. I want remedial work done there immediately, either the road realigned or something done before someone is killed there,” he said.

The crash at lunchtime on Thursday involved a single car, carrying a mother and two children, aged nine and 11 years.

“We were going away and I was taking my time because the roads were wet. We just came around the bend there in Kilnamona and it spun around in the middle of the road and I didn’t know whether it was going to stop or when it was going to stop and it went into the other side of the road and it was facing back towards home again. It had turned and got stuck in the ditch. It was frightening to be honest. The kids are a bit shocked,” the West Clare mother told The Clare Champion.

“This is the third accident here this week and they need to something about it before someone gets killed and by then it is going to be too late. I was just thankful that the car stopped when it did because I was only a few yards from the steel pole with the Kilnamona sign on it and I didn’t know when it was going to stop or if it was going to stop,” she added.

Ennistymon Councillor Richard Nagle travels the road regularly. “The latest crash highlights the need for immediate action to be taken by the NRA and Clare County Council to improve the road surface and erect safety barriers at this location. In addition to this, signage needs to be put in place to highlight that this is effectively an accident black spot. This accident highlights the need for an immediate upgrade of the N85 because there are huge volumes of traffic using that road on a daily basis,” Councillor Nagle concluded.