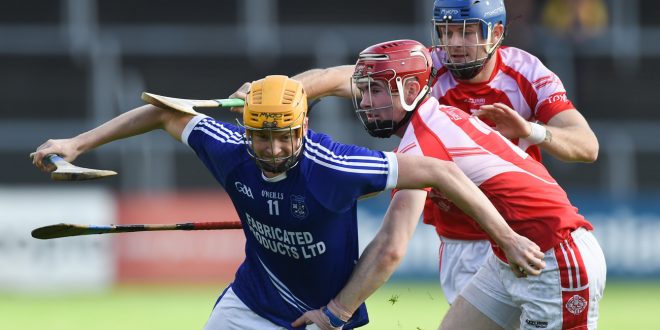 David Collins of Cratloe in action against Liam Corry of Eire Og during their quarter final in Cusack Park. Photograph by John Kelly.

The way is clear for the semi-finals of the Clare senior hurling championship, the pairings for which will be decided on Monday evening, after the remaining two quarter finals took place at Cusack Park this Sunday afternoon.

Feakle turned in an impressive performance to record a 2-19 to 2-15 win over Wolfe Tones who played the final eighteen minutes with fifteen men after Ben O’Gorman was sent off. Dealt a huge blow in mid week when inter county forward Aron Shanagher was ruled out of the tie, the loss of O’Gorman left the Shannon side without two key players.

That said, it would be wrong not to credit Feakle who played very impressively and picked off some excellent scores in the process. They were 0-11 to 1-6 in front at half time and struck for a goal early in the second half. Wolfe Tones rallied and got to within a point of the East Clare side with nine minutes remaining but Feakle finished strongly and a goal from Oisin Donnellan three minutes from time finally killed off the Wolfe Tones challenge.

The outcome of the last of the quarter finals was in doubt right to the finish. Five unanswered points in the final five minutes saw Cratloe finally kill off the challenge of Eire Og who will wonder for some time how they lost this one. In a second half in which the teams were level on five occasions, Eire Og certainly had great scoring opportunities which weren’t converted and which proved very costly on a day when Shane O’Donnell caused a lot of problems for the Cratloe defence.

The senior football semi-final line up is also complete after Kilmurry-Ibrickane’s  2-19 to 0-9 win over Lissycasey at Cooraclare. Kilmurry will play Cooraclare in next week’s semi-final with the champions of the past two years, Miltown St. Josephs (holders) up against Cratloe

Conor McGrath again top scored for the winners finishing with a tally of 0-9.

Clooney-Quin will play O’Callaghans Mills in the senior B final after they scored a two point win over Sixmilebridge on a final scoreline of 1-15 to 2-10.

The way is also clear for the intermediate championship semi-finals. Broadford and Sixmilebridge had booked their places on Saturday and they are now joined by Tubber and St. Josephs who beat Parteen and Smith O’Briens respectively this Sunday afternoon.

Bodyke and Kilmaley recorded victories in their quarter finals in the junior A championship this Sunday and they join Ogonnelloe, who won on Saturday, in the last four.