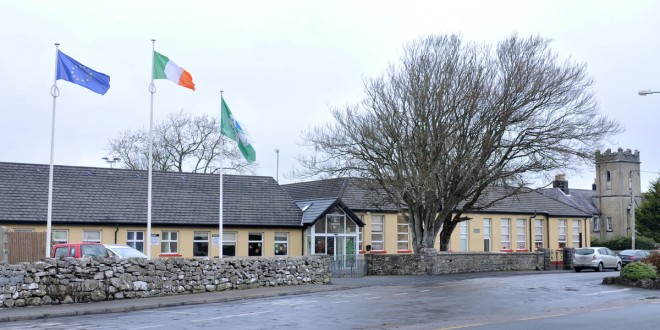 Sixth-class pupils at St Joseph’s National School in Kinvara beat off schools throughout the country to win the title of Responsible, Innovative, Social Entrepreneurs of the Year at a ceremony in Dublin recently.
The 33 pupils were announced as winners of the 2014 Bizfactor, which means they will receive seed capital to help make their business idea a reality.
The children, aged between 12 and 13 years, pitched their idea to 250 people outlining details of their company SG Inc – Sensory Garden Developments and asking for investment.
The pupils sought, and achieved, investment for the development of a multi-sensory garden in the ASD unit of St Joseph’s, which caters for children with autism and other complex needs.

The students were inspired to take on this project by a fictional story they read about Melody, an 11-year-old girl with cerebral palsy and by some members of the company being involved in working with children in the ASD unit, as part of a buddy system.
“We feel this will be a very significant development, not only for our school community but also for the wider community and especially for people with special needs in our locality and county,” they told the audience in Dublin, after making it to the final six companies in the country.
“In year one, we plan to open the garden as a centre of excellence for school tours, suitable for children with special needs and have already received  a high level of interest from schools with ASD units around County Galway. We also hope to have a seasonal event, such as a Christmas Light show, which will attract people in our locality,” they explained.
“Our initial capital of €605 comes from self-generated funds raised through a cake sale. This money will now be invested in the company, putting us in the lucky position of not having to pay back a bank loan. We have received confirmation from the board of management that the space for the garden will be donated to our company rent-free and that all insurance costs are covered by the school insurance.
“We have also secured a further investment of €200 from an Irish Canadian entrepreneur who visited our school just last Tuesday and was impressed by our company,” the children continued.
The pupils plan to make money by charging an entry fee for school tours and to the seasonal events, as well as by selling hand-made merchandise.
“Our merchandise will include a variety of packs of greeting cards and bracelets, which will also advertise the garden. While school tours will be limited to children with special needs, our seasonal events will be open to the general public in our locality and will generate further revenue,” they explained.
Businesses in Kinvara and surrounding areas are invited to become involved in sponsoring the garden through advertising in the garden brochure, or by sponsoring a raised bed in the garden, which will have the business name displayed.
The seed capital of €300 will fund the initial phase of the project, which they hope will be up and running before the end of June.
In the second and third year, using the company’s profits, the children hope to extend the garden and its features and believe that the company has the potential to grow significantly in the coming years.
Bizworld Ireland is made up of a group of educators and business people who have come together to help children learn about money management, critical thinking and enterprise in a fun and creative way. The organisation held a workshop in the school back in November, where the children learned about starting their own business, researching it, marketing it and making it a success.
“The workshop lasted for two days. It was mayhem but most amazing,” said teacher Máire O’Keeffe.
“They had to make a film and sell tickets to it. It really developed their business skills. On the first day, they had to do market research with the third class to see what kind of film they would like to see. They then made an animated movie. It was very interesting because they didn’t get any prize for the best movie, the aim was to get as many people to watch the movie as possible so the children learned about the importance of merchandising, especially to big companies. Some of the companies gave away bracelets or cookies or different things they made for free with each ticket they sold to the film. It was wonderful and everything the children did as part of this project tied in with the curriculum in some way,” Ms O’Keeffe stated.
For the Bizfactor competition, sixth class formed five different companies, having identified different needs throughout their community. They then developed companies with plans to address each of these.
Topics ranged from a heritage trail aimed at bringing visitors who come to Dun Guaire Castle into the village and increasing their spend in the local economy, to a firm which would increase awareness of road safety, to a company that would organise events to increase fitness among children.
“All of the children were involved in different companies at first, then after one was selected to go forward to the final, all the children joined together as part of that company. It was very interesting really because all the children drifted to the areas that they felt most comfortable with, so some wanted to work with figures while others were more interested in the communications or design side of it,” Ms O’Keeffe explained.
“We were thrilled to get shortlisted. I guided the children but the work was their own and they were just dripping with ideas and were so creative. They collaborated with each other, they communicated persuasively through letters and their pitch and increased their critical thinking and these are all skills that are so important in the 21st century. Between the seed money and the €200 investment received, the children now have €500 in hard cash to start work on the project.
“These kids are finishing here in late June but we are so proud of them here in the school and I know they are thought very highly of in the village too. They may be leaving but they are also leaving a great legacy,” Ms O’Keeffe concluded.

Previous Drugs are part of Kilrush life
Next Clare Local Elections 2014: The count in pictures

Pupils well up to scratch