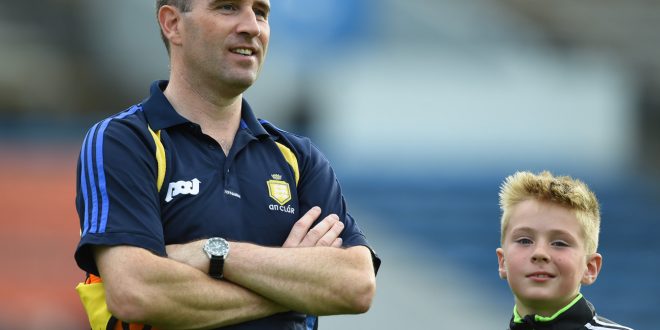 Clare welcome All-Ireland champions Limerick to Cusack Park on Sunday for a crucial final round tie in this year’s National Hurling League.

John Kiely’s side suffered their first defeat of the campaign against Cork in the Gaelic Grounds last weekend, while Clare extended their unbeaten start to the year at Fortress Cusack Park.

The home side need to win to be sure of their progression to the quarter-finals of this year’s series, while the Shannonsiders are already guaranteed of their place in the last eight.

Double All-Ireland winning Clare centre-back Seanie McMahon feels Clare will have taken a lot of positives from their campaign to date.

“I think it has proven hugely competitive this year. I know there’s no relegation but I don’t think it has made a huge difference to it. Teams are really using the league to prepare as best they can for championship, and every day you go out you want to win. I think overall, Clare started poorly against Tipperary if the truth be told, which probably highlights the step up from the Munster League to the National League. They had a good win over Kilkenny at home which kicked them off, the game against Cork was all about the huge amount of frees that we gave away, and the last day against Wexford, I thought for period of the game they were excellent. It looked as if they eased off for the last 20 minutes and nearly got caught. When you ease off in a game, it’s very hard to get the momentum back up. Up to now, I think it has been a positive league for Clare. They’re playing some really good hurling, and they’re learning lessons and identifying issues and I think now is the time to do that. I think it’s way better to know if we have a problem with tacking or fading out of games in February rather than realising that in May. The last day against Wexford we saw a huge improvement in the amount of frees we gave away so I think Clare are in a good place. It’s great to see the likes of Diarmuid Ryan coming up along and knowing that you still have a few others to come back into it. Overall I think it’s going to plan and it’s going to be a massive game on Sunday” he noted.

Clare almost let a 13 point lead slip against Wexford on Sunday, with a late flick from Jack Browne denying Davy Fitzgerald’s side a share of the spoils. A similar scenario unfolded when Clare hosted Kilkenny, with a late penalty for the Cats on that day ensuring that just a point separated them at the final whistle. Seanie feels it’s something they will have to address.

He said: “If you knew exactly what was causing it, it would be easy to sort it. It could be the fact that it’s the league that means that same urgency isn’t there, when you’re 12 or 13 points up it can be hard to keep going at times. In the Wexford game, they didn’t hurl at all and Clare were far superior and dominated the game for the first 50 minutes. At that level, teams will always have their period of dominance and I think Wexford got it at that stage and drove on. Once you dip, it’s very hard to get it back up. There’s also an element of concentration and focus and the work-rate probably did drop a bit. It’s a good lesson to learn that even if you are 13 points up, and you drop, there’s a fair chance you could get caught at inter-county level. It will be interesting to see if that’s something we can improve on and make sure it doesn’t happen again. If that happens in championship, you may not get a second chance”.

Over the four games to date, Clare have conceded an average of 1-20 per game, and are currently second bottom on the standings with a scoring difference of minus seven.

“There’s still plenty more to come from lads and maybe some of them are not hitting the form yet that they are capable of, particularly some of the more experienced lads. I found myself as I got older that it took a bit longer to get right, so to expect everyone to be up to full pace in February is maybe not the way to go. I would actually be happier to see that lads aren’t because that would mean that you are peaking too early. There’s certainly room for improvement but there’s also a bit of stability coming into the team. You can see the likes of Rory Hayes has a lot to offer, it was good to see David Fitzgerald playing so well the last day and I think Conor Cleary at centre-back has been doing very well, he’s been really solid there especially in the first two games. You can even see teams aren’t going down the middle with him because he is a solid presence there. Again, I would much rather there be plenty of improvement to come at this time of year rather Clare be flying it and beating teams well. Ultimately, there’s only one time to be performing at full pelt and that starts in May” said the Doora Barefield man.

Limerick make the trip to Ennis looking to avoid successive defeats in Cusack Park after losing out heavily in last year’s Munster championship tie. Seanie is expecting a backlash.

“For me, this game of all the league games is one that I think you will see an edge to and a bit of a bite about it. Clare and Limerick games have always had that bit of an edge to them. Limerick come in as All-Ireland champions, they will be smarting from getting beaten the last day, but I think Clare will be looking to lay down a marker ahead of the championship. I think this will be really good game, it should be a really hard, psychical battle and I think that’s what we all want. Clare have to get the result to make sure they go through so I think you will see more bite in this one than we have in any of the others” he said.

It remains to be seen if Clare will make many changes to their starting 15 for Sunday’s tie, with John Conlon’s ankle injury reportedly not as bad as first feared. Seanie doesn’t think there will be sweeping changes when the team is named on Friday night.

He said: “There’s been a bit of stability around the team for the last few weeks, and maybe now is the opportunity to throw a few lads in too, but I don’t see them making a huge amount of changes. It could be a chance to bring lads in off the bench too and see are they capable of being involved in the Munster championship because it’s only in games like this that you find that out. If you want to test lads out, then this is the best game in the league to do that”.

So can Clare pick up the points?

“Yeah, I think we have been hurling well. Even in the Cork game, I thought we were the better team, even though the frees did kill us. A lot of them were frees but we were unlucky on other ones. I think that comes from the fact that Clare are such aggressive tacklers which is a great trait to have. Against Wexford, we put some beautiful scores together and I think we are in a good place. Limerick are going really well too, there’s no getting away from that either. I would fancy us to beat them though. I would confidence in our lads, and I would fancy us to beat Limerick any time to be honest with you. We have the players, and if they perform, we have a great chance of winning that game” he concluded.

You can listen to the full interview below.

Clare v Limerick gets underway in Cusack Park on Sunday at 2pm.