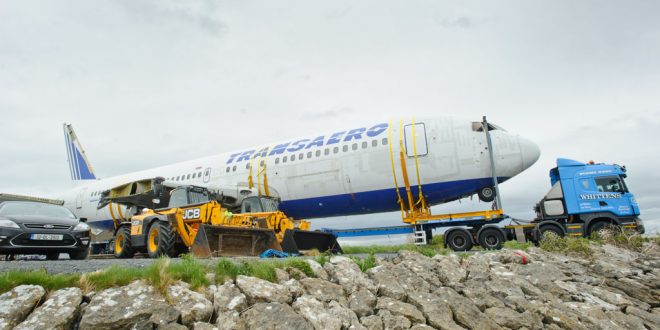 Cleared For take-off...A view of the 767-200 TransAero plane at Shannon waiting to be removed by barge onto the River Shannon. Photograph by John Kelly.

Plane sailing up the coast

It was reminiscent of  the flying boats era on the Shannon Estuary early on Thursday morning when a giant plane was loaded on a barge for transport by sea to Enniscrone in County Sligo.

The TransAero Boeing 767-200 was bought by business man David McGowan to be installed in his glamping site near the popular resort.

It was a major logistical exercise, involving up to 60 people, to get the plane from Shannon Airport compound to the waters’ edge on Wednesday and onto the barge, as tides were a factor.