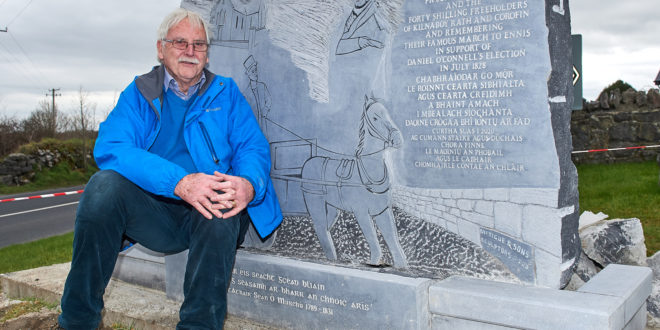 Cumann Staire is Dúchas Chora Finne has erected a monument to Fr. John Murphy and the local 40 shilling freeholders for their famous role in the O’Connell Election of 1828. Our picture shows Dr Maccon Macnamara, whose great grandfather Dr. Michael Macnamara attended Fr Murphy in 1831 when he was dying. Photograph by John Kelly

A stone sculpture commissioned by Cumann Staire is Dúchais Chora Finne and  created by Kilnamona sculptor Michael McTigue has recently been erecdted in Corofin.

It is in memory of the famous march of the local forty shilling freeholders, led by Fr John Murphy PP of Kilnaboy Rath and Corofin,  into Ennis in July 1828, in support of Daniel O’ Connell’s election.

With the famous Burren terrain depicted in the background, the monument shows Fr. Murphy on his horse and gig followed by the local 40 shilling freeholders carrying tree branches in support of O’ Connell.

St. Bridget’s Church, the first architect designed Catholic Church in the Killaloe Diocese since the reformation, built by Murphy in 1822, features in the background.

It was here that Murphy made his famous speech in the Irish language to his parishioners seeking their support for O’Connell and Catholic Emancipation. This speech was widely reported both locally and well beyond the area and was witnessed by Richard Shiel one of the national leaders of the Catholic Association.

The forlorn figure in the background represents landlord Sir Edward O’Brien, who was reported as listening from a distance, as his tenants flocked to hear Murphy’s address. Daniel O’ Connell himself features beside the script to the right hand side of the sculpture.

The arrival in Ennis of the Corofin and District voters is well documented in the newspapers of the time and indeed in many historical works since and we are told that the greatest cheer was reserved for Murphy and his entourage.

Fr. Murphy rarely left  Daniel O’Connell’s side for the duration of the election and subsequently the Catholic Association in Dublin presented a special chalice to Corofin Church to mark the contribution of John Murphy to the emancipation campaign.

The son of a blacksmith ,Fr Murphy was a native of Knocknagun, Newmarket on Fergus and Newmarket’s famous hurling pitch is called after his name. A monument in his memory is also located within Newmarket  parish.

At a future date, it is hoped that the Corofin monument will be officially unveiled by Dr. Maccon Macnamara, President of Cumann Staire is Dúchais Chora Finne whose great grandfather Dr. Michael Macnamara attended Fr Murphy during his final illness in 1831.

The project was funded through contributions from  the people of Kilnaboy, Rath and Corofin as well as the extended Corofin diaspora and grant aided by Clare County Council.