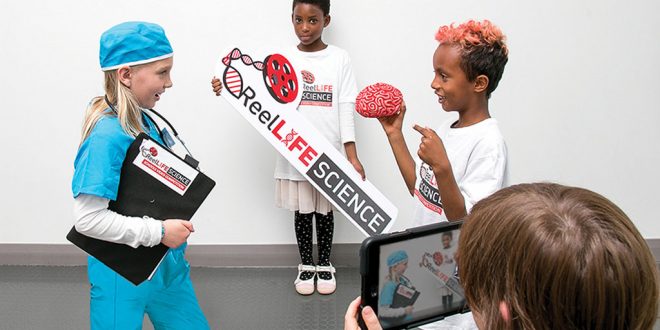 PRIMARY and secondary schools across Ireland are being challenged by NUI Galway to produce an entertaining and educational short science video for this year’s ReelLIFE SCIENCE competition.

Supported by the Science Foundation Ireland Discover programme and the CÚRAM Centre for Research in Medical Devices at NUI Galway, ReelLIFE SCIENCE will award €3,000 directly to the winning schools for science promotion.

Since launching in 2013, more than 5,000 students in almost 200 schools around Ireland have taken part in ReelLIFE SCIENCE, while the videos produced have been viewed 70,000 times in over 100 countries worldwide.
Director general of Science Foundation Ireland, Professor Mark Ferguson said, “We are delighted to support this initiative, which cleverly combines science literacy and creativity, provides a great opportunity for students and teachers to engage with science in a novel way. ReelLIFE SCIENCE encourages young people to connect with the science and technology in their everyday lives, and to bring that knowledge to a wider audience, while promoting current Irish research and development.”

Secondary school students can choose Irish Science Heroes, Myths Busted! and How Things Work as their competition topic, while primary school topics include Science and Me, Life in Space and The Science of Farming.

The closing date for submissions is Friday, October 14 and winning schools will be announced on Monday, November 14 during Science Week 2016, when they will be invited to attend a public screening and awards ceremony during the Galway Science and Technology Festival on November 27.
More information can be found at www.reellifescience.com.