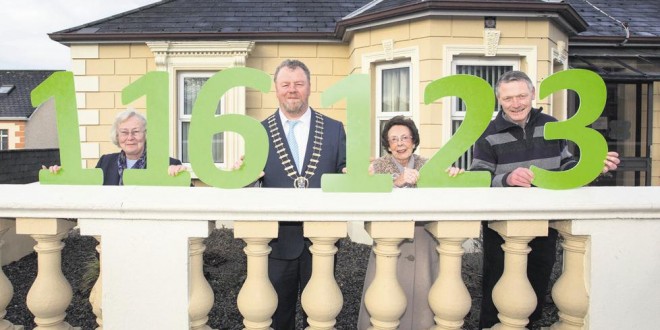 A NEW free to caller number for the Samaritans was launched this week at the Clare branch in Ennis.
The number, 116123, is being trialled in Clare and a few other areas around the country before being rolled out nationwide next year.
Mayor of Clare Joe Arkins and Mayor of Ennis Mary Coote Ryan joined Samaritan volunteers for the launch.
Angharad Harding, director of the Clare and Ennis branch, said; “This is a very welcome initiative for Clare. Our experience has been that the worry of the cost of phone calls prevents people in distress from calling Samaritans. Many of the people who contact us are not suicidal, but may be struggling to cope with their problems and our volunteers provide a safe space for them to talk.
“Despite the strong public response to our existing number, it is still not as widely known as we would like it to be. 116 123 is an easy number to remember and we believe it has the potential to be as universally know as the number 999.”
The free number came about following a decision by the European Commission to reserve a common telephone number for emotional support helplines in all EU member states. This followed on from a decision by the European Commission to designate other 116 numbers for services of extreme social value, such as those concerned with missing children or victims of crime.
In Ireland, ComReg assigned the emotional support helpline to Samaritans as it is the only organisation in the country, which already meets or exceeds the European Commission’s minimum standards for the harmonised emotional support service, notably its 24 hours a day, seven days a week coverage.
Since the number was allocated, the Samaritans have partnered with the six largest telecoms providers (eircom, Meteor, O2, Vodafone, 3 Mobile and BT) which are members of IBEC’s Telecommunications and Internet Federation. They have committed to a two-year funding programme, expected to be in the region of €800,000, for the number.
Under the partnership agreement calls to 116 123 will be free to customers of each of the six participating companies
“In this day and age, we all know someone who is finding it difficult to cope and it’s important that people speak about the issues that are getting them down. Few services operate around the clock like Samaritans, which makes the service a very important one in the area of suicide prevention.
The fact that the Samaritans take over 400,000 calls per year is indicative of the importance of this service,” said Ms Harding.
The local branch, on the Kilrush Road in Ennis, took some 16,000 dialogue contacts last year. It is open for more than 140 hours every week.
It recruits new volunteers twice a year and at any one time there are between 100 and 120 volunteers on its roster.
Whenever the branch is open there are two volunteers on duty and, as well as taking phone calls, volunteers answer emails sent to jo@samaritans.org. People can also call to the centre between 10am and 10pm.
Volunteer Daire O’Criodain said that having a free number is a boost to the Samaritans, while he paid tribute to people who have supported the organisation in this county over the years.