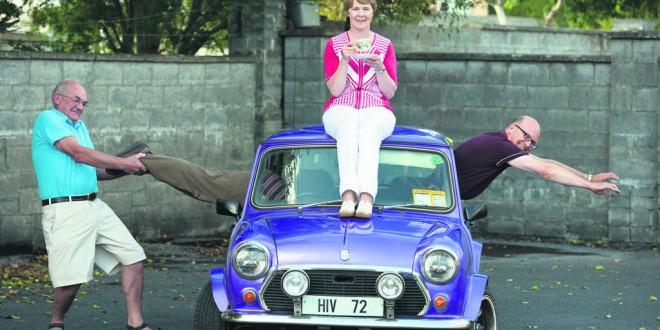 At the launch of the Guinness World Record attempt to get the most people in a Mini Cooper were organiser Peadar White with volunteers Gerry Malone, Aine Gavin and Kevin Phelan. Photograph by John Kelly.

TWENTY-eight people have never been squashed into a classic Mini before but an attempt will be made to smash the old World Record of 27 in Ennis this Sunday afternoon.

The Clare Classic and Vintage Association, along with the Bald Eagles group, are looking to force an update to the Guinness Book of Records. It is one of several events happening at Liam Cleary’s Kia Dealers on the Kilrush Road, from 11.30am on Sunday.

The first event will be a re-run of a 1901 race in Ennis, which formed part of that year’s Great Motor Tour of Ireland. It will start at around 11.30am.

Second off will be the World Record attempt, at around 3pm. Organiser, Peadar White said there are strict guidelines about how the would-be record holders must proceed.

“It’s a 1960s Mini and the rules are very strict. Everyone has to be over five feet tall and over 16 years of age. We have to provide a peace commissioner on the day and that will be Councillor PJ Ryan, he’ll be doing the counting,” Mr White said.

It will be one of the most novel events of the year in the county town and, on the day, money will be collected for the Samaritans.

Peadar, who has raised money for the same charity numerous times in the past, said the idea first came to mind a number of months back. “I got the idea last February, when we were trying to work out what we’d do for the year and we applied to Guinness then for it. They gave us permission in June, after we applied in May. The record started with 17 people, then went to 24 and now it’s at 27 so we have to try and beat that.”

The people who will be squeezing into the tiny vehicle have been lined up, he said. “They’re mostly from the Break Through Dance Academy and we may get students as well from Rice College.”

They have been practising already and Peadar is quietly confident that the record will tumble.

“We have practice done and it’s going well. But it’s on the day that you work it out and you can’t remove anything from the car. You have to have standard seats and you can’t even remove the mirror, everything in it has to be standard.”

The last few record-breakers need only be in the vehicle for a few moments. “People have to stand at each door with the windows closed, count five seconds, then open the door and let them out. They have to be filmed coming out of the car as distinct from going in.”

Even if the record doesn’t go to plan, it will be a fun afternoon, Peadar feels. “It’ll be a complete laugh anyway,” he said.

The car was bought especially for the world record attempt, as Peadar decided it was better that a borrowed one wasn’t used, lest any damage be done to a vehicle that was never designed to carry more than a handful of passengers, not to mention 28.

The final event of the day will be a display from the Break Through Dance Academy.

The organisers are appealing for all vintage and classic car owners to come along on the day with their vehicles, as well as all Mini owners.

The Samaritans will benefit from funds collected on the day. The charity provides confidential emotional support on a 24/7 basis to people experiencing feelings of distress or despair, including feelings that may lead to suicide.