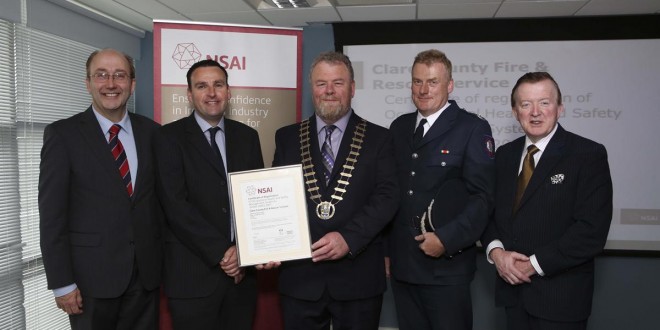 Identifying workplace hazards and assessing and controlling fire hazard risk has helped Clare firemen scoop a major national award.
Clare Fire and Rescue Service  joined 31 private and public sector organisations from across Ireland to receive service quality awards – OHSAS 18001:2007 certification, from the Minister of State for Small Business, Deputy John Perry recently.
Mayor of Clare, Councillor Joe Arkins, Adrian Kelly, Clare Chief Fire Officer and Ger Hartnett, senior executive Health and Safety Officer, Clare County Council attended the awards’ ceremony in Dublin.
The “Occupational Health and Safety Management Systems’ standard was first published by the National Standards Authority of Ireland (NSAI) in 2007.
The standard, which is the only auditable international standard for health and safety, sets out a preventative and proactive approach to identifying workplace hazards and assessing and controlling risk.
Councillor Arkins said that maintaining health and safety standards to the highest level is “critically important for both fire service personnel and the general public whom they serve”.
The Mayor praised all Clare County Fire and Rescue Service personnel for their planning, organisation and hard work in providing a quality, year-round service to those who live in, work in and visit Clare.
The awarding of OHSAS 18001:2007 certification comes just six months after Clare County Council received the overall Local Authority Award in the 22nd Annual National Safety Awards scheme, hosted by the National Irish Safety Organisation (NISO) and Northern Ireland Safety Group (NISG).
Clare Chief Fire Officer, Adrian Kelly said the management of Health and Safety of personnel is a top priority for all employees and noted this award is an acknowledgement that the way that they are managing health and safety is to the highest recognised standards.
“Clare Fire and Rescue Service personnel are among the most highly trained in the country and this accreditation underlines that staff are also committed to implementing the highest standards of health and safety throughout their operations. While we were always satisfied that we were achieving the highest possible standards, securing this accreditation helps us to promote this fact to the wider public throughout the county,” he said.