Home » Sports » Ryan: Time For Leadership And Results For Clare In 2020 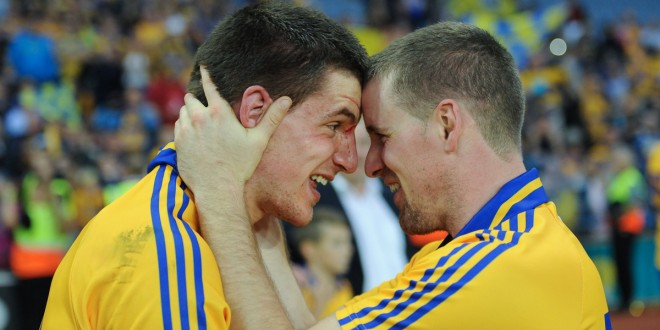 Ryan: Time For Leadership And Results For Clare In 2020

CLARE and Limerick will do battle this weekend in the Munster Hurling League, and the Shannonsiders have a very short hop across the border to Sixmilebridge in order to renew one of the biggest rivalries in GAA.

While teams will be far from their peak in early January, there will be plenty of bite in this fixture as Clare will look to put the last meeting of the sides, which Limerick won by 18 points, behind them.

Colin Ryan has experienced the white heat of the Clare-Limerick rivalry on many occasions and the Newmarket-on-Fergus man says players will be fired up regardless of the competition.

“Brian [Lohan] will be aware that Clare have won two Munster leagues recently but that he is going to be judged on championship, no matter what.

“Limerick – and all the publicity they have received recently – will want to go out there and win it. It’s early doors and both teams will be trying new things and players, but no matter who plays, both teams will want to win it. With the Clare-Limerick rivalry, it doesn’t matter if it’s even a challenge game. I think it has even grown fiercer in recent years due to Limerick being successful.

“The first hard hit is going to rev everybody up and there will be a few words here and there. The players know each other so well by now by going to college, or school or hanging around together. They may be friends but that changes when you take the field,” Ryan explained.

Clare are facing into the Limerick clash on the back of a pre-Christmas defeat of All-Ireland champions Tipperary in Nenagh, the first competitive game of manager Brian Lohan’s tenure. Ryan says little was learned and little can be taken from the Banner’s first run of the season.

“I wouldn’t read too much into these early-season fixtures. Tipp likely didn’t have too much training behind them and a lot of the Clare lads that were playing were just trying to make a name for themselves. You’re just trying to unearth three or four players that are up to the standard and can help out come championship.

“Winning games is important too though as you don’t want to lose every game and then drain your confidence that way, but you can’t read too much into that. They’re All-Ireland champions but that wasn’t the All-Ireland team,” Ryan pointed out.

One thing the Newmarket marksman noted was the more direct style of play that Clare seemed to adopt in their first game under Lohan and is interested to see if this is the way the team may look to operate at times in 2020.

In recent years, Clare have opted for a short-passing style game with runners off the shoulder of the player in possession, but Ryan believes that this side has the capability and personnel to play whichever way they are instructed to.

“It looks as if it is going to be a more direct style, from what I gather, from looking at Brian’s teams down through the years, and going on what we’ve seen already against Tipperary.

“It is all down to personnel. You first have to work out your best team, and that may not mean your best 15 hurlers. You have to work out what the balance is. The last day Niall Deasy got a run out at centre-forward. Our own Colin Guilfoyle at full-forward. Which leads me to believe the ball will be coming long and direct fairly quickly. You need a balance as well, though. You can’t just play six big players that you hope will win every battle.

“You still need the likes of Podge Collins, Tony Kelly and David Reidy who has came back into the squad, to pick up the breaks.

“The thing is though; Clare have probably been scoring a lot recently, but I definitely think something needs to be changed up at the back. We have been doing the same thing in the backs now for the last few years and it has caused us difficulty. I saw Jack Browne was tried at full-back line the last day and David McInerney might go to wing back to strengthen our half-back line.

“Doing the same thing over and over and expecting different results is a sign of madness so Brian likely has that in his head that the full-back line needs a bit of tweaking,” Ryan surmised.

While changes of style and personnel are worth tweaking, Ryan believes, he also insists that the key thing above all that Brian Lohan and his squad will be remembered for is results. Ryan also suggested he would like to see the Brian Lohan era bring with it new leaders on the pitch.

“Results are number one, no matter what way you look at it. That’s what we will be looking to see from Clare in 2020. You’d also hope to see a few lads standing up this year and taking the team to the next level. You’re hoping the likes of David McInerney, Tony Kelly, Colm Galvin, and the likes, make it their team.

“They can’t keep counting on flashes of brilliance. You’re hoping there will be a bit of leadership and someone will take over the mantle from John Conlon and Pat O’Connor who have been the elder statesmen of the team for the last couple of years. There may even be a change in captaincy this year too, I’m not too sure. You’re looking for the next group of players to take ownership of the team.” Ryan said.

With the start of the national league just over three weeks away, Clare will be sharpening their swords as the games come thick and fast and Ryan was optimistic that Clare can leave 2019 form well behind.

“Everyone thinks that Tipp, Limerick and Cork are the three best teams in Munster, and it is up to us and Waterford to upset them. But, all we have to do realistically is win our two home games and try sneak something away from home and then you’re in an All-Ireland series.

“They are definitely going to have to put in a performance against one of the bigger teams and they also can’t afford the type of capitulation that they had against Tipperary or Limerick last year.

“It’s a new season now with some new managers in Munster so it is a chance for Clare. Realistically, the talent is there, it is just about out our best foot forward and gaining some results this year,” Ryan concluded.