Home » News » Russell – ‘A lot of progress being made’ 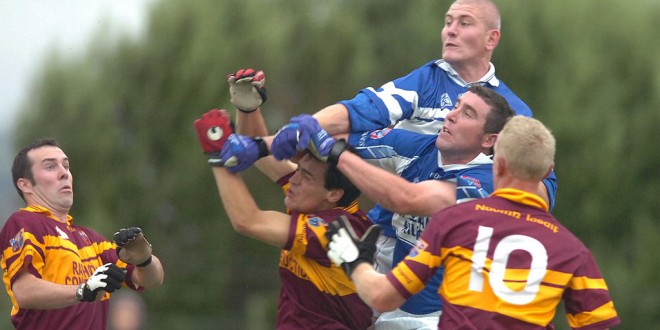 David Russell dominating in the air for Kilkee against Miltown.

Russell – ‘A lot of progress being made’

ALTHOUGH no longer a member of the inter-county senior football squad, Kilkee’s David Russell continues to play a big role in the development of the game in Clare.
Last year he coached Naomh Eoin from the Loop Head peninsula to the Clare Junior Football Championship title and he continues to be in charge of that club as they prepare for this season’s intermediate title race.
In addition, he remains a vital player with his beloved St Senan’s, who are challenging strongly to win promotion from Division 3 of the league.
Having been a key player in the Clare senior football team for well over a decade, Russell called time on his inter-county career two seasons ago but continues to follow the fortunes of the side and is eagerly looking forward to the team’s clash with Cork.
“A lot of progress is being made and keeping Division 3 league status was a massive boost to all, young and old. Getting a championship win is always important and the lads got that when they accounted for Limerick and they now go to Cork with a great chance. They are playing good football and are well organised and hopefully some of the injured boys can return to help them out,” he said.
“There is a great chance there. The pressure is on Cork and if they don’t get off to a good start, Clare will push on and gain in confidence. We now have a team capable of scoring. For years we were struggling to get 10 points but now we don’t have a problem with getting good scores and that helps to win games. We have a lot of players capable of scoring.”
He went on, “In my time we had some exceptional players but getting them all to play in the same year was a problem. We hadn’t a squad big enough to compete. We’d always compete with the lesser counties but to get a win over a Cork or a Kerry would be massive and if Clare could win this one, it would be another lift after retaining Division 3 status and get more people wanting to get on the panel.”
Russell has no doubt about the pride that the players have in playing for the county and is clearly impressed about the decision of Shane McGrath and Pat Burke to throw their lot in with the home county of their parents.
This, he suggests, “might be something that should be considered for clubs. With Naomh Eoin, whom I train, there are lads travelling home every Tuesday and Thursday. It’s the same with Kilkee and while it’s costly for these lads, they don’t want to play for anyone else. They all love Clare football.”
While he agrees the loss of players such as Podge Collins, Martin O’Leary, David Tubridy and Shane McGrath, due to injury, is a big blow, Russell suggests, “If this happened 10 years ago, we would be decimated. We would be talking about a 20-point hiding but not so now. Clare people are talking about a victory on Sunday, which is testimony to what is happening in Clare football. Losing by a point in the qualifier last year was a kick in the teeth but the lads have pushed on this year, which is massive.”