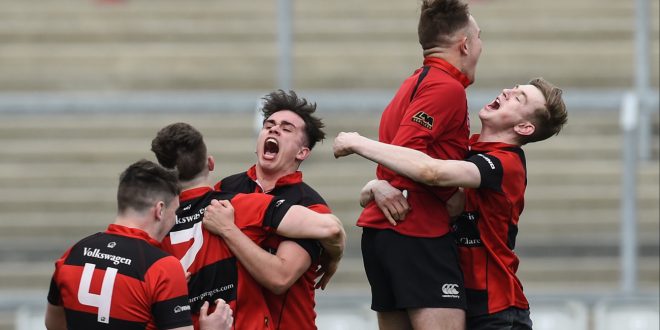 Ennis players celebrate on the final whistle during their U-18 Munster Club Final win against Garryowen at Thomond Park. Photograph by John Kelly.

‘MY Lovely Rose of Clare’ echoed around Thomond Park on Sunday evening as delirious Ennis youths celebrated a historic victory in the Munster U18 Cup final, pipping Garryowen after a pulsating game that was in doubt until literally the last second.

Even the most partisan Ennis supporters must have felt for Garryowen captain and out half Harry Byrne who was off target with two late penalty attempts, either of which would have won the game. The pressure on the young man was very severe both times, particularly with the second one as it was clear it would be the last action.

The scenes on the pitch thereafter really illustrated the extremes of feeling that sport can evoke, with Ennis players and club members celebrating wildly at the same moment as Byrne sank to the ground, crushed.

The first 20 minutes saw Ennis take a 6-3 lead, David Mescall with two penalties for the winners with Byrne scoring one for Garryowen.

However Garryowen would take the lead after their first try, which was a dramatic score. A pass from Ben Quinn on the edge of the Garryowen 22 was telegraphed by Ben Moloney, who took off on a lung busting run, just evading some despairing Ennis tackles and finally touching down. Crucially Byrne would miss the conversion though, his kick hitting a post, an early hint of how his afternoon would turn out.
[data-ps-embed-type=slideshow] > iframe {position: absolute;top: 0;left: 0;}

Garryowen had another try through Derry Gleeson before half time, but with the conversion missed once again, the gap only went to 13-6.

On the resumption Byrne had the first score, a well struck penalty from just inside the Ennis half. But David McNamara, who had some great moments in the second half replied with the first Ennis try, with Mescall converting from a tough angle.

After 52 minutes the dimunitive Derry Gleeson found the slightest of gaps in the Ennis rearguard and scored under the posts, leaving Byrne with an unmissable conversion, as the scoreline went to 23-13 in favour of Garryowen.

For Ennis Alan Culligan showed great cuteness when stealing over the Garryowen line after a quickly taken penalty, while Mescall converted again. However Ennis almost immediately conceded a penalty in their own 22, meaning three points were won back for Garryowen.

Following up on his try, McNamara played an excellent kick into the path of Zach Whelahan, who touched down under the posts, 21 minutes into the second half, with Mescall converting.

That was the last score of the day, but there was huge late drama as Byrne missed the two penalties. In both cases he was standing to the left of the goalposts and also put the ball wide on the left side.