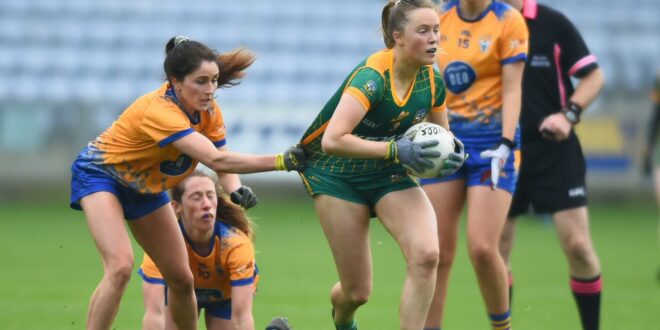 2020 came to an end for the Clare ladies footballers on a day when it was clear that their quota of luck had been used up in reaching this stage.

Events on the final day of the group campaign had seen the Banner navigate the most unlikely path to the last four, but while it might have been a case of bonus territory, there will still be a sense of regret at the opportunity lost.

In the lead up to the game, the focus was on producing a performance, but on a day when nothing seemed to go to plan, it will be that, rather than the result, that will be the biggest disappointment.

The other side of the coin is that Clare simply met a more experienced and powerful opponent who were streets ahead in terms of their development curve, with their defeats in the last two All Ireland finals evidently being the ultimate motivation. Their defensive structure and ability to transition to attack with lightening speed was simply too much for Clare to handle.

13 goals, including seven against Sligo, had come from a potent Clare attack in reaching Saturday’s semi-final. It was clearly something Meath had identified as a mass defence allowed Clare advance to the 45m line, but from there to the Meath goal was not on the green list with Clare struggling to find the gaps in which to find the pathway through.

At the other end, the concession of two opening quarter goals within as many minutes set the tone for this contest as Meath punished Clare for any hesitations. Niamh O’Sullivan had the ball in the Clare net after seven minutes with a powerful angled drive to the top corner. The kickout resulted in a free for the Royals which was converted by top scorer Stacey Grimes, but a real hammer blow arrived moments later when Emma Duggan’s run was halted in the penalty area. Grimes made no mistake with the spot kick to send her side 2-2 to 0-1 clear and left Clare with a mountain to climb. Two Grainne Nolan frees came either side of another point for Grimes, but it was the goals that were the difference at the opening water break with Meath 2-3 to 0-3 in front.

The second quarter was a much more even affair but Clare still struggled to find a way through a disciplined Royal’s rearguard. It meant a dangerous inside line were starved of possession with the likes of Niamh O’Dea and Chloe Moloney forced to come deep in order to get involved. The numbers Meath had in defence meant space was swallowed up, and while Clare pushed up in search of scores as the game wore on, it left space at the back for a strong Meath midfield and half forward line to exploit. They extended their lead at the break to 2-6 to 0-4, but could have been further out of sight only for an excellent smothering save by Micaela Glynn in the dying stages of the half.

That sense of all the luck being used ahead of the trip to Portlaoise was compounded in the opening minutes of the new half when a six point swing put the result beyond any doubt. Clare needed a fast start and came within inches of getting it, but Grainne Nolan’s ball over the top had just too much on it for Chloe Moloney to reach. Meath swept downfield with Vikki Wall racing through before offloading to Bridgetta Lynch to slot home their third goal and end any faint Clare hopes of comeback.

From here, it was one way traffic as Meath found scores at will as their greater experience and game management meant they were always in control. A fourth goal arrived from the penalty spot with Grimes converting once more, and while Clare did have a few scrappy chances for goals late on, Meath dealt with them comfortably to ensure their place in a third consecutive final.