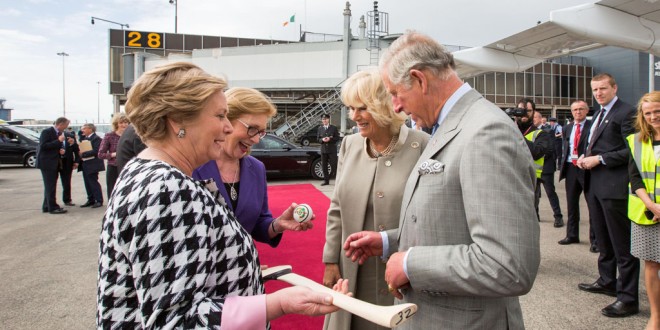 Minister for Justice and Equality, Frances Fitzgerald and Education Minister, Jan O'Sullivan present Prince Charles and Duchess of Cornwall, Camilla with a hurley and sliotar as a present for Prince Charles' granddaughter Princess Charlotte. Photograph by Sean Curtin

PRINCE Charles departed Shannon Airport this morning following his and the Duchess of Cornwall Camilla Parker Bowles’ visit to the West of Ireland expressing his delight with the two days.

Boarding the jet for Belfast at Shannon, Prince Charles uttered three words that summed up his experience:  “special, very special,” he stated.

After speaking briefly with the royal couple ahead of their departure, Justice and Equality Minister Fitzgerald said that the visit had further strengthened relationships between Ireland and the UK.   “They said they really enjoyed their visit, both of them. The Duchess said they were very sad to leave. Prince Charles said there were a few more counties took visit and that he hoped to be back again. The visit has contributed hugely to the relationship between our two countries.”

Education Minister Jan O’Sullivan said that the visit had very much turned thoughts away from the past and to the future.  “I think anyone who watched this trip closely or even from afar will have got a real sense that the Prince of Wales and Duchess of Cornwall genuinely enjoyed themselves.  Today, as they departed, it was obvious that that was, indeed, the case.

“The way that they were received by the public and the way they engaged with the public showed just how strong relationships between the UK and Ireland are today.  It really is now all about the future and what we can do together.”

Shannon Chairman Rose Hynes said that there was a genuine sense from the Prince and Duchess that they thoroughly enjoyed their visit.  “It was clear they were really delighted with their visit. I remarked as much to him and that it had been a really important visit for this region.  He said it was ‘perfect, just perfect’.”

Said Irish Ambassador to the UK Dan Mulhall:  “I think this visit will do wonders for our very close and warm, developing relationship with our near neighbour. It will have benefits across the board in terms of the relationship at an economic level and the number of tourists coming to Ireland will increase as a result of this visit.”