Home » Sports » Round Up Of Clare IFC Round One Action 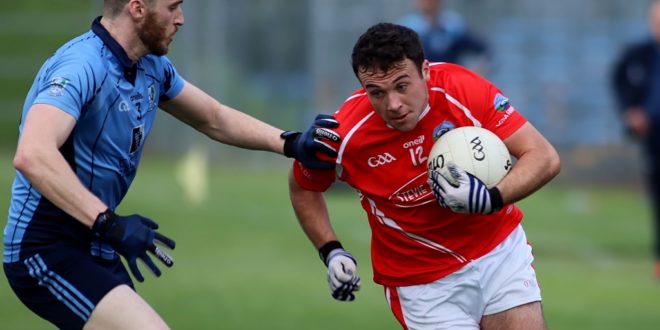 Action from Corofin v Kildysart in the Clare IFC. Pic by Willie O'Reilly

Round Up Of Clare IFC Round One Action

There is no doubting which game takes the title of being the most entertaining across all codes this weekend, as St Joseph’s eventually came out on top in a high scoring encounter.

It took until the second period of extra time before the decisive score came when Kieran Thynne, who was reintroduced having been substituted earlier in the contest, batted to the net from close range to give St Joseph’s a cushion they would hold.

There was drama throughout the game with the men from the peninsula looking like they had stolen a march late on as Owen Lynch’s goal saw them go four points clear with time running out. Naomh Eoin played much of the second period with 14 men after Mark McQuaid was sent off, and they eventually wilted as Parish substitute David O’Brien reeled in the deficit with a run of four unanswered scores to force the added period.

The writing for a tight contest was on the wall at half time in normal time with the sides level at 1-5 each. Naomh Eoin fired the opening goal of the game through Conor Magner after ten minutes, but that was cancelled out just before the half-time whistle as Cathal Duggan found the net.

A second arrived for St Joseph’s just after the restart when Leo Duggan pounced on a loose ball and it went from bad to worse for the West Clare men when McQuaid was sent off for an off the ball incident. It did not deter Naomh Eoin and when the second half water break was called, the game was still level and all set up for a grandstand finish. Lynch’s goal looked to be the score that would finally decide the contest but O’Brien’s late contribution meant extra-time would be required.

O’Brien was a key figure in extra time with a further three points to his name helping his side to build a 2-15 to 2-12 lead at the break. That gap was maintained until Thynne’s late goal eventually swung the balance to the Parish.

A strong closing 20 minutes saw Kildysart fend off a spirited challenge from Corofin in the opening round of the Clare intermediate football championship.

In that period, the winners outscored their opponents by 0-9 to 0-2

Corofin saw full-back Brendan Keane leave the field with an injury less than two minutes into the game, but they recovered from that early blow to see the game level at the opening water break.

Emmet McMahon opened the scoring from a free but the impressive Robin Mounsey and a textbook Jamie Malone point looped over Robert Eyres’ crossbar to put the North Clare men in front. Diarmuid O’Donnell and Kieran Eyres put Kildysart back into the lead, with Gearoid Cahill firing over a free to see the sides level.

The second quarter of the contest was slow to get going with both sides having trouble in finding in the target. Cahill and McMahon traded scores but it was the closing minutes that would really tell the story of the half. Diarmuid O’Donnell had a glorious chance for goal but saw his shot dragged wide of the upright. Corofin punished with another Cahill free before a second goal chance was passed up by last year’s beaten finalists as Oisín Coyle saw his shot well blocked on the line. Mounsey and Cahill closed the first half scoring to see Corofin ahead by 0-7 to 0-4 at the break.

That lead was extended early in the second period as the Cahill-Malone axis was causing real problems for the Kildysart defence. Shay and Jamie Malone notched further scores, but a dominant spell for Kildysart saw them draw the game level with five unanswered scores. Two of them came from the ageless Ger Bobby Kelly, while Emmet McMahon (2) and Neil O’Connor also landed scores. There was another great goal chance too but Keith O’Connor saw his shot just flicked wide. Mounsey and Kelly swapped scores just before the water break where the sides were level at 0-10 each.

Kelly, Neil O’Connor and McMahon pointed to push Kildysart three clear inside the final ten minutes but Rob Eyres was called on twice to deny Kevin Keane from close range.

Kildysart played the closing stages with 14 men after Keith O’Connor was sent to the sinbin, and while Corofin cut the gap to the minimum with scores from Cahill and Malone, Kildysart held on.

Michael Cusacks belied their status as newcomers to the intermediate grade as the 2019 Junior A champions easily saw off the challenge of an indisciplined Wolfe Tones.

The Shannon men ended the game with 13 men while also picking up two black cards over the course of the contest. The winners also failed to finish with the full complement while seeing two players taking the ten minute timeout.

That aside, there was no doubting the better side with the first seven scores of the contest coming the way of the North Clare men. Aidan Forde’s accuracy from frees was a key component as he finished with 0-6 overall with five of those from place balls. Joey Droney also created havoc in the inside line while the pace and power of midfield duo Domhnall McMahon and Aidan McNamara was too much for the Shannon men to handle.

By the time the first water break came, Michael Cusack’s were 0-4 to 0-0 ahead with Droney and Forde having a brace each. Wolfe Tones were wasteful in front of goal, notching six first half wides, and midway through the second quarter Cusack’s were 0-7 to 0-0 clear with Forde (2) and McMahon on the board.

Wolfe Tones ended the half with the last three scores thanks to two frees from Chris Dunning and a palmed effort by Gary Cusack. The leaders finished the half with 14 men after Ruaidhri McMahon saw red for an off the ball incident.

The trend of the opening half repeated itself in the second as Cusack’s rattled off four unanswered scores to put the tie beyond doubt as Forde (2), Hugh Kelly and McNamara put the North Clare outfit 0-11 to 0-3 clear. Dunning’s dismissal even up the teams, and while Tones finished the scoring through Cusack (2) and Jayme O’Sullivan, the afternoon ended on a sour note as Dean Devanney was sent off following a melee in front of the stand.

Last year’s beaten semi-finalists Shannon Gaels moved a step closer to another appearance in the last four with a comfortable win over Liscannor.

The tone of the contest was evident from the opening attack when Niall Ellis crashed to the net to give his side the perfect start. Liscannor responded with the next two scores, but a run of four without reply gave the West Clare men a cushion they maintained for the remainder of the contest. Ellis, Michael O’Malley, Barry Crehan and Darragh Bohannon were all on target and with 20 minutes played they led 1-4 to 0-3. Liscannor struggled for scores throughout the contest with Oisín Leyden kicking five of their scores from frees with only Robert Lucas on target from play.

Four more scores for the Gaels arrived before the break with recent recruit Barry Crehan punishing twice from placed balls along with one from Thomas Kelly and another from Ellis. It gave their side a 1-8 to 0-4 lead at the break and left no question as to who was going to emerge victorious.

The third quarter was the slowest of the contest with two more points for each side before the final water break. Ellis capped off a fine performance as he slammed home his second goal of the game with just over five minutes to play with another point from O’Malley rounding off the scoring.

Kilfenora got their bid for promotion off to perfect start with a composed victory over the Townie’s second string side.

The foundations for the victory were laid in the opening half when top scorer Micheál Duffy fired a goal to give his side a 1-5 to 0-2 lead at the break.

The North Clare men were the better team throughout with Duffy helping himself to a personal tally of 1-4, with their overall total shared between four scorers.

The game was something of a slow burner with Kilfenora in front by 0-2 to 0-0 at the opening water break before Duffy’s goal opened up a cushion that would prove crucial. Further points from Duffy and Robert Nagle after the break extended their lead even further while Daniel Egan also got on the board with a point in the second period.

The game fizzled out in the closing stages as Kilfenora took total control to move into the draw for the winners round.

A strong second half performance from O’Currys saw them reel in Coolmeen and ease to victory on Saturday evening.

Coolmeen started the brighter and raced into a 0-6 to 0-3 lead at the first water break thanks to Kevin Val McMahon, Aidan Corry and Cathal O’Connor.

This early lead was eaten into by scores from Thomas Clancy, from play and placed balls, as well as points from Jim Marrinan and Danny Downes.

O’Currys found their stride as half-time approached and cut the deficit to just two points, as Coolmeen led 0-7 to 0-5 at the break.

A rejuvenated O’Currys came out a hungrier side in the second half with more scores from Clancy, Marrinan and Downes.

It was after the second water break that Thomas Clancy landed the telling blow as his final quarter goal gave O’Currys a cushion of a four point lead and it was one they wouldn’t relinquish.

Thomas Clancy was the star of the show as he landed 1-7 in a stellar display and it was a deserved victory after a strong second half showing from O’Currys, while Coolmeen managed just two points in the second half.