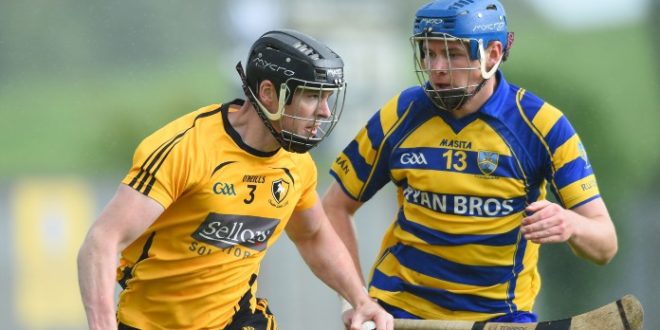 Action from the clash of Clonlara v Ruan. Pic by John Kelly

The final intermediate game of the weekend proved to be the most dramatic as these two second string sides shared 6-52 between them over a brilliant 80 minutes of hurling.

In the opening 60 minutes, it proved to be the quintessential game of two halves with Inagh-Kilnamona racking up 2-14 before the break, and Sixmilebridge doing likewise in the second period.

When the half-time whistle sounded, Inagh-Kilnamona led by 2-14 to 0-7 with both first half goals from Damien O’Halloran along with Barry Keating’s frees putting them in the ascendency.

This Sixmilebridge side were unlucky not to reach the last four 12 months ago, only losing out to eventual champions Broadford after a penalty shootout in their quarter-final tie. It means that their last two championship games have gone to extra-time, and this time it was a storming second half fightback that forced the added period. That fight back was sparked by goals from Christy Griffin and Lorcan Fitzpatrick, while Sean Lynch was in fine form from placed balls to see the sides tied at 2-21 to 3-18 at full-time.

It was Sixmilebridge who carried that momentum through to the first period of extra-time as they rattled off five points in a dominant early spell. It was enough to see them put some daylight between the sides at the break, as they led 2-28 to 3-19, with Keating firing another goal for the Combo.

Five more points followed in the second period and despite another green flag for Inagh-Kilnamona from Jamesie McConigley, the Bridge followed up their senior victory with another good win to run out 2-33 to 4-19 victors.

This was billed as the tie of the round and the East Clare neighbours did not disappoint as they served up a thriller in Shannon.

Tulla were making their first appearance in the second tier since being relegated 12 months ago, and took some time to grow into this contest before eventually assuming control as the tie wore on.

Scariff got off to the perfect start as quickfire 1-1 from Conor Hayes provided the perfect response to Darragh Corry’s opening free. They built on that momentum as Diarmaid Nash sent over four placed balls while further scores from Michael Barrett and the impressive Tomas McNamara gave them a strong grip on proceedings.

Tulla eventually settled with Niall Bolton’s freetaking along with the youthful exuberance of Andrew Conheady and Conor Murphy saw them edge their way back into the tie. The goal from Hayes proved the difference at the break, with Scariff leading by 1-8 to 0-8.

It was a much more composed Tulla after the restart, and Bolton profited to the maximum after a brilliant David McInerney run created the opening for Bolton to fire to the net. Bolton’s accuracy from placed balls was proving critical and further scores from him allied to Corry landing two 65m frees saw Tulla move 1-13 to 1-8 clear.

There was never going to be much between the sides and before long parity was restored once more. Diarmaid Nash continued to punish any indiscipline by converting frees, but it was Conor McNamara’s goal that brought the sides back on an even keel once more.

Tulla finished the game stronger with the last three scores of the contest, but it still took some brilliant defending by the outstanding Sean Torpey to clear a last ditch goal chance to ensure the win.

Last year’s beaten finalists St Joseph’s got their 2020 campaign off to a great start with a win over 2019 semi-finalists Smith O’Brien’s in Bodyke on Friday evening.

The contest was neck and neck for over 60 minutes before late introduction Cathal Ruane landed 1-1 to send The Parish to victory. Smith O’Brien’s were very competitive, and this was largely down to Tommy Reddan’s monster haul of 1-11. The sides were level on numerous occasions in the tit-for-tat battle and went into half-time all square with Tommy Reddan bagging all 1-6 of the Killaloe side’s scores. Reddan buried a first half penalty to level affairs after a St Joseph’s raced ahead through points from Alan O’Neill, Tom Hannan, Dara O’Shea, Conor Tierney and Jarlath Colleran.

Early points in the second half from Tierney and Tom Hannan put St Joseph’s ahead once more but Smith O’Brien’s showed their tenacity to claw their way back and take the lead by two points with 45 minutes played.

In another swing of momentum, Cathal Ruane sprang from the bench to level the game and then it was St Joseph’s turn to steal a lead but as added time approached, the Killaloe side levelled the game through Reddan. Eventually though, the deadlock was broken when Cathal Ruane found the Smith O’Brien’s net to settle the tie.

It was a hard earned victory for Doora-Barefield against a tenacious Smith O’Brien’s side that are sure to make their mark in the intermediate championship.

A late goal from young star Diarmuid Cahill in what was his debut at adult level saw Corofin off to the perfect start in the Clare intermediate hurling championship.

The North Clare men had been edging the contest throughout but the Blues were still in touch with just three points between the sides as the game entered the closing stages.

Cahill’s goal was quickly followed by a point to finally settle the result, with the Cahill brothers sharing a total of 1-14 between them for the winners.

They raced into an early 0-5 to 0-1 lead, and extended that dominance to move 0-11 to 0-3 clear in the opening period. Peter Power and Darren Duggan accounted for most of the Newmarket scores, and five unanswered before the break shared between the duo saw their side trail by 0-11 to 0-8.

Corofin kept chipping away at the scoreboard to move back into a five point lead, but Newmarket were dogged and Cathal Noonan’s goal ensured they stayed in touch ahead of the final quarter.

Power and Cahill continued to swap scores down the home straight, but the younger sibling produced the critical moment of the game to finally break the Newmarket resolve.

A goal from Ian Murray inside the closing quarter was the ultimate deciding score in this contest as Bodyke edged a tight contest.

There was no debating who the better side in the second period of this game was as Bodyke overturned a two point half-time deficit to run out deserved five point winners.

Mark Flaherty was the scorer in chief for Killanena, with 0-8 from him helping his side to an 0-11 to 1-6 lead at half-time.

The opening Bodyke goal arrived from Paddy Fitzgerald in the second quarter of the game to put them 1-6 to 0-7 ahead, but Killanena reeled off four unanswered scores to take back the lead at the break.

Bodyke started well in the second half to level the contest once more, and further dominance saw them go three points clear at the final water break. That gap became six when Murray goaled soon after, with Bodyke’s greater scoring spread proving crucial in the end. Cathal Noonan did find the net late on for Killanena, but it was not enough to affect the overall result.

Paddy Fitzgerald finished with a total of 1-7 for the winners, while their overall total was shared between seven scorers, including 0-2 from substitute Peter Flower.

Parteen cruised to an opening round victory over Clarecastle in Shannon on Sunday afternoon.

An impressive 10-point tally from centre-forward Evan Fitzgerald was a huge help to the South Clare side. Jack Kirwan bagged a goal for Parteen early that set the tone for the game and once they got into full flow, there was only ever going to be one winner.

Fitzgerald notched six points in the first half as Parteen dominated in most areas of the pitch with great showings from Kirwan, Colm Quinn, Gavin Rackard and Nathan Fox.

Parteen led by 1-10 to 0-6 at the break as Oisín Hickey and Joe O’Connor chipped in with points as Clarecastle’s scores came from Dylan Browne (0-3), Kevin Hartigan, Niall Quinn and Tommy Howard.

Things went from bad to worse for the Magpies in the second half as scores became much harder to come by and Parteen extended their advantage once more. Kevin Hartigan and Tommy Howard would be Clarecastle’s only scorers of the second half while Parteen added points through Nathan Fox, Eoin Phelan, Barry Dolan, Gearóid Reddy, Dan Cooney and Gavin Rackard to round off a comprehensive victory.

It was the Aidan Lynch show in Newmarket-on-Fergus on Saturday evening as the Ruan veteran landed 0-11 in an excellent display to help his side to victory over a youthful Clonlara side that won the Junior A title in 2019.

Lynch was ultra-reliable and expertly accurate from placed balls and his deliberate free-taking routine ensured Ruan would edge this close contest.

The sides were level at 0-7 at the break as Lynch landed 0-6 for Ruan, while youngster Seán Begley impressed for Clonlara at midfield, landing three points from play in the first half.

In the second half, Robin Mounsey’s class started to make a difference for Ruan at centre forward and he landed four points in the half in a fine display. Brian Roughan’s second half strike on goal appeared to give Ruan the comfortable lead they desired, but two more points from Begley, as well as a 55th minute Micheál Stritch goal kept Clonlara within striking distance.

Late points from Mounsey and Lynch ensured that Ruan kept their noses in front until the final whistle for a hard-fought and well deserved victory.

Tubber got their season off to a flyer when they eased their way past a youthful Cratloe side in Tulla on Sunday afternoon.

Blaine Earley landed six points for the North Clare side and it was he that was on the mark early, along with Domhnall McMahon to give Tubber a lead they would never relinquish.

Seán Gallagher landed the lion’s share of the Cratloe scores, but they were very hard to come by. When Cathal Murray fired part James Hickey for a goal after 20 minutes, it gave Tubber breathing room and it was the catalyst to pull away from their rivals. Domhnall McMahon then added a goal himself just on the stroke of half-time to ensure Tubber would take a 2-6 to 0-5 lead in the break.

More points from Blaine and Clive Earley, as well as a third goal after 58 minutes from Ronan Monahan, who landed 1-1 from play, was the capstone on a very solid performance from Tubber, whose defence, which was led by Pat O’Connor, coughed up very little scores.

Second half points from Gallagher and Padraig Chaplin did little for Cratloe’s chances.

Tubber will have designs on becoming champions and this solid start to the season can only build confidence toward that.