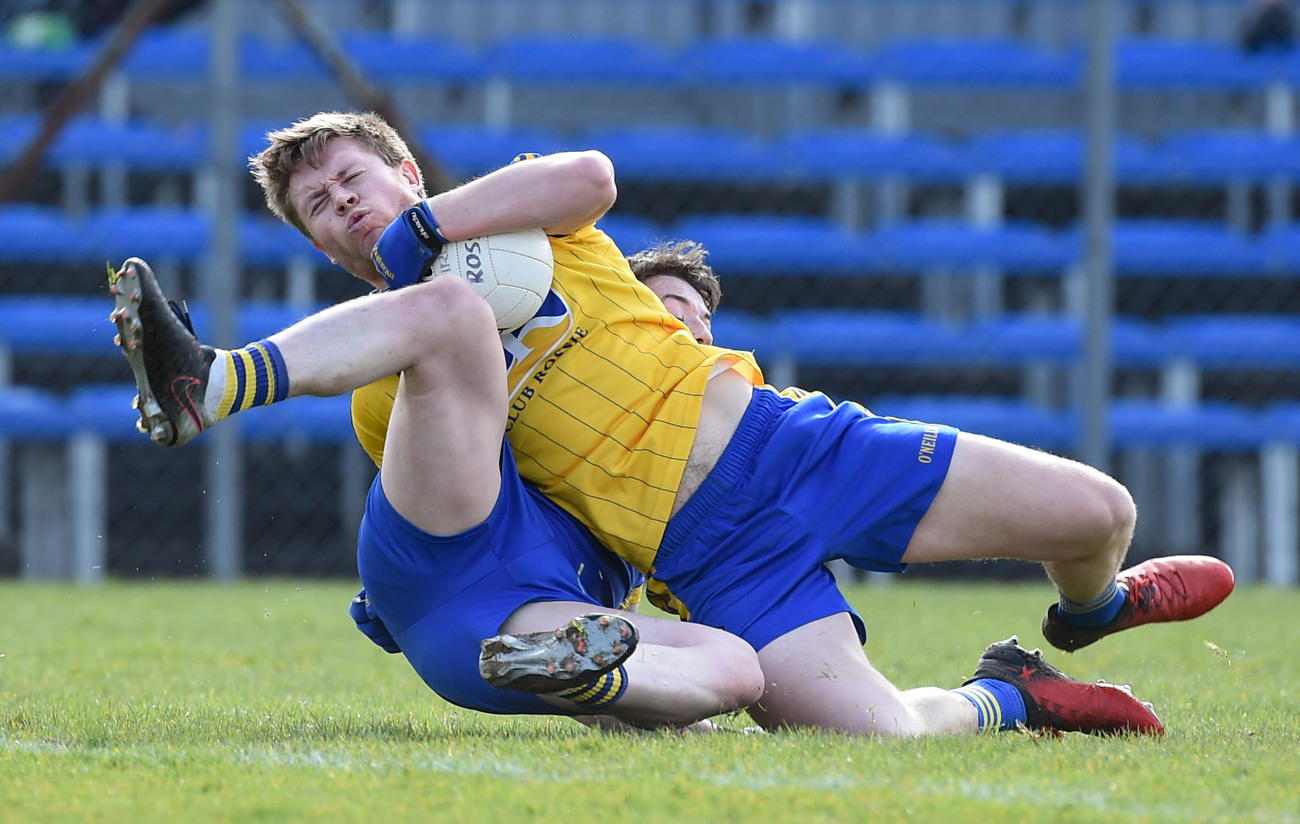 Keelan Sexton of Clare in action against Niall Daly of Roscommon during their National League game at Cusack Park. Photograph by John Kelly.

DISCIPLINE is costing the Clare footballers. For the second successive game, Ciaran Russell was sent off, this time on a straight red card, eight minutes into the second half. Russell was also sent off against Down in Newry, on a yellow and black card.

While a team can be unlucky on a once off, Clare’s disciplinary issues are now costing them. When Russell was red carded, Roscommon were 1-10 to 1-8 ahead and winning it was going to be difficult enough for Clare as it was.

However, Roscommon were able to pick up all of the Clare forwards and deploy Niall Kilroy as their sweeper, a rule that Russell had filled for Clare.

Roscommon, who are now on seven points, led 1-9 to 1-7 at half-time. Clare made the better start with David Tubridy goaling in the third minute, following slick build up play involving Cathal O’Connor and Gary Brennan, who also was deployed at full forward at stages.

The pivotal first half score was Diarmuid Murtagh’s goal, 13 minutes before the interval. Roscommon won a Clare kick out and Murtagh played a clever one-two with full back John McManus, before finishing superbly.

Playing in front of a very disappointing attendance of 1,643, Clare showed plenty of spirit at times in the second half and kicked some nice scores. However the fact that Roscommon had an extra player for 35 minutes, including injury time, was significant.

When Cathal Cregg netted Roscommon’s second goal, nine minutes form time, that all but sealed the result. The Kevin McStay managed side now led 2-14 to 1-11. Clare captain Gary Brennan did net a late Clare goal, flicking home a diagonal delivery from Cian O’Dea. Roscommon responded smartly with points from Smith and Cregg to seal the result and keep their promotion prospects intact. Clare now sit on four points with games to come away to Cork at 7pm on Saturday and then at home to Louth.

A more detailed report and post match interviews, will be published in Thursday’s print edition of The Clare Champion.

West Clare native Peter O'Connell has worked for The Clare Champion for 12 years and covers everything from sport, especially GAA, news, features and has been even known to branch into the fashion scene on occasion.
@@westclarepage
Previous Ballyea fail to field in u-21 championship
Next Clare fade after bright first quarter