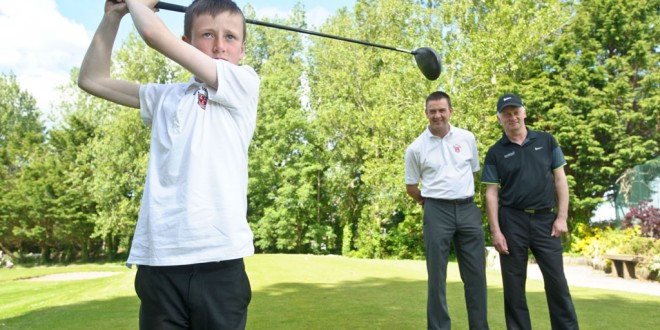 Ronan putts among the world’s elite

UP-and-coming Ennis golfer Ronan Herbert took a big step forward in his promising golf career when he earned the right to play in the US Kids Golf European Championship, which was decided over a number of historic links in Scotland recently.
The nine-year-old did not feature among the winners but was proud to represent his country and Ennis Golf Club and tee off with the world’s best young golfers, aged five to 18. More than 550 of them from 35 nations competed in what is Europe’s premier junior golf tournament.
Ronan won his way to Scotland through winning the Irish final of the US Kids event in Portmarnock on April 10 last. On that occasion he shot a level-par round and over the Gullane links in Scotland’s East Lothian, he turned in respectable scores in very difficult weather conditions.
Ronan,who plays off a handicap of 16, is a son of Leo and Jana Herbert and a pupil of Scoil Críost Rí, Cloughleigh, Ennis.
He commenced to showcase his talents at Ennis Golf Club, when he became the youngest winner of both the president’s and captain’s prizes.
His father, Leo, is also member of the club and his grandfather, Dick Herbert, has played a lot of golf there.
A strong background of golf also comes from his mother’s side. Her father, the late Frank Kearse, was also a noted Ennis Golf Club player with his brother, Mickey. Together, they played in a memorable and still-talked-about Knox Cup final in 1976, won in a record time over 18 holes by Frank. It was Mickey’s turn to win the cup in 1980, beating Matt Flynn in the final. Michael’s son, Johnny, was also a Knox Cup winner in in 2003 and daughters Kathleen and Patsy also featured among the winners in Ennis over the years.
The progress of young Ronan is being carefully watched by Ennis Golf Club members and especially by club professional, Martin Ward, who has played his part in Ronan’s achievements so far.