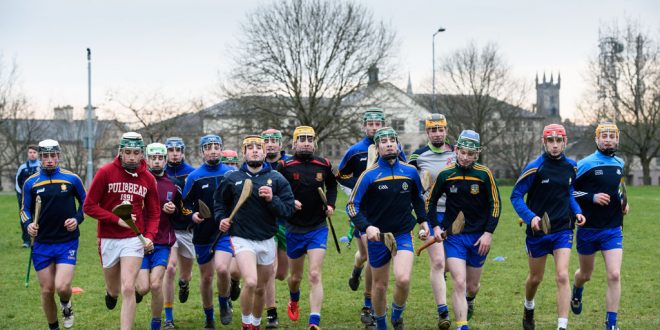 Rice College players warm up during a training session ahead of the Thomais Mhic Choilaim Cup Munster final in the Gaelic Grounds, Limerick

THIRTY-eight years is a long time to wait for a senior title but that’s how long has passed since Rice College in Ennis last won a Munster colleges senior hurling title. On Saturday, they will be hoping to end that wait but to do so they have to overcome the favourites, St John the Baptist College, Hospital, in the Corn Thomáis Uí Choilm Munster Colleges Senior B Hurling Championship final.

The final, at the Gaelic Grounds in Limerick at 12 noon, is the opening game on an attractive double bill and will be followed by the Harty Cup final between Our Lady’s College, Templemore and St Colman’s.

Rice College go into the final without Cathal Ruane, who suffered a broken collarbone in the semi-final. The Doora-Barefeld player is a huge loss, as he has been one of the team’s key players this season.

Teacher and team boss Pat Devitt said, “There are a lot of distractions. We have been pushing hurling for a long time; five years with this group. We have been lucky, to a degree, that a lot of the lads are involved with county squads now as well. They are doing an awful lot of hurling, a lot of training and sometimes it is quite difficult to get a full team out here. In the long-term, the school has benefited from this and we are where we are because of development squads and clubs and we have to acknowledge it.”

Devitt, who is assisted by Eamonn Clohessy, another member of the Rice College teaching staff, said success in the championship is important for the school.

“For as long as I have been involved, and I am a past pupil, hurling has been synonymous with the school and there are teachers in the school putting in huge work. Over the years, we have probably been hurling at grades below what we should be hurling at.

“I am hoping we can take a huge step forward with this team and create our own bit of history. We have a special group of lads. They have put savage time in for the five years I have been involved and I would like to see them cross the line on Saturday.

“Hospital are a serious outfit. I have seen them playing twice and I can safely say we are up against a strong outfit. They deserve to be in the final; they are certainly one of the best teams in it. We deserve to be in the final ourselves. We have shown a lot of character in a lot of games throughout the year. We have been underdogs in two or three of those matches and we got over the line through sheer character and determination.”

Devitt acknowledged that Ruane’s injury is a huge blow.

“I have known him a long time. He is the best player we have had in my time in the school; a fantastic athlete who is at all the training sessions and to say he is a loss is a total understatement. He has been absolutely fantastic for us this year but, at this stage, we need to get the others on board and push on.”

He appealed to the parents and hurling followers in the county to come out and support the team.
“I anticipate a very close game and hopefully, with the help of a big following, we can get over the line,” he said.

Key players in the evenly balanced Rice College line-up include goalkeeper Eamonn Foudy, Cian McInerney, Bradley Higgins, Alan Culligan, and Conor Tierney. In their games with Causeway Comprehensive from Kerry and Coláiste an Spiorad Naomh from Bishopstown, the Ennis side were rated as underdogs but showed great composure to come through both tests. It will take another committed performance to win Saturday’s final.