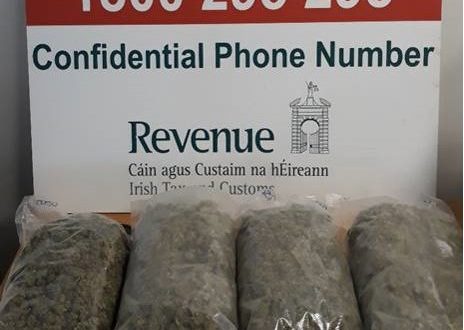 All three parcels were destined for addresses in Limerick City and County.

These seizures are part of Revenue’s ongoing routine operations targeting the importation of illegal drugs. If businesses or members of the public have any information regarding drug smuggling, they can contact Revenue in confidence on Confidential Phone Number 1800 295 295.

Fiona McGarry joined The Clare Champion as a reporter after a four-year stint as producer of Morning Focus on Clare FM. Prior to that she worked for various radio, print and online titles, including Newstalk, Maximum Media and The Tuam Herald. Fiona’s media career began in her native Mayo when she joined Midwest Radio. She is the maker of a number of radio documentaries, funded by the Broadcasting Authority of Ireland (BAI). She has also availed of the Simon Cumbers Media Fund to report on development issues supported by Irish Aid in Haiti. She won a Justice Media Award for a short radio series on the work of Bedford Row Project, which supports prisoners and families in the Mid-West. Fiona also teaches on the Journalism programmes at NUI Galway. If you have a story and would like to get in touch with Fiona you can email her at fmcgarry@clarechampion.ie or telephone 065 6864146.
Previous Four deaths and 98 new Covid cases nationally
Next Inagh-Kilnamona Give Newmarket The Blues To Book Clare SHC Quarter-Final Spot