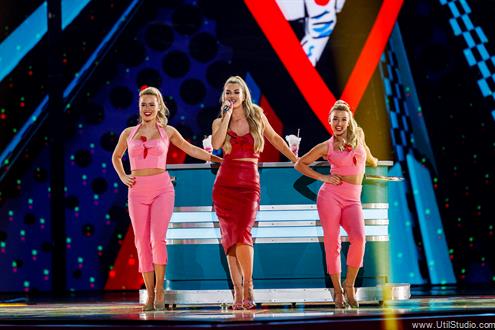 EAST Clare Eurovision star Sarah McTernan has shared her experience of anxiety and depression and is encouraging other young people to protect their mental health, by being open about their challenges.

The 25-year-old singer-songwriter who produced a stellar performance for her country at the Eurovision Song Contest in Israel in May of this year is the epitome of poise and confidence, but has told The Clare Champion that this wasn’t always the case.

It was a bout of post-natal depression after the birth of her now two-year-old daughter Mia that was a major turning point.

“I learned a lot about myself after Mia was born,” Sarah says. “At first though, I really went through a huge amount of anxiety. I wasn’t sleeping at all because I was just watching Mia all the time to make sure she was breathing. I also used to have a really distressing image of her falling. I would just see that over and over again and it was so disturbing that at one stage I thought I was going mad.”

It was only when she began to research what she was experiencing that Sarah realised there were others who had suffered the same post-natal depression.

“At first I bottled things up, but then I actually found a couple of online forums and began to realise there were other women who were going through the same thing,” she explains. “That gave me the courage to talk to my friends and there were lots of them who told me they’d had the same thing. That was a massive turning point for me and it made me realise that it’s so important for open up and talk about these kind of experiences.”

Sarah says that while she did avail of the support of doctors and counsellors, it was a “journey inwards” that really improved her situation.

“When I realised that this was an issue for so many other mums, I began to relate to others who were experiencing mental health challenges and I found others I could speak to and share my story with,” she explains.

Having to confront mental health issues made Sarah aware that anxiety and depression had been recurring challenges in her earlier life.

“I suppose that once I realised that what I was feeling was intense anxiety, I was able to link that to experiences I’d had earlier in my life, going right back to my childhood. I remembered that when I was in school, even as early as seven years of age, I just didn’t want to go in, because of the anxiety. I had similar experiences in college too, for the same reason. To realise that there was a pattern to how I was feeling was a really important part of my journey in learning about my own mental health.”

After grappling with post natal depression and rebuilding her mental resilience, Sarah faced another hurdle in the form of online abuse, trolling and hate mail – ironically while she was enjoying a major career high point and representing Ireland at Eurovision.

“At first, I suppose, I was so busy that I was a bit oblivious to what was going on online,” she says. “It was after Eurovision and when the anticlimax hit me, it really hit hard because of the abuse. There were hundreds of letters and messages form complete stranger making all kinds of threats. It was terrifying. I just don’t understand how someone who doesn’t know a thing about you, can do something like that. They give no thought to the affect that their words will have on someone.”

“It has toughened me up I suppose,” Sarah admits, “but when I see people now online attacking each other, it makes me so angry, because it can really damage those people.”

Sarah’s advice to others experiencing mental health challenges is to listen to their emotions and to try to identify their triggers.

“Be aware of the situations, people and issues that can cause you to feel anxious,” she says. “There’s lots of things that I have to think about still when it comes to managing anxiety. You mightn’t think it, but things like having too much sugar can be a major issue. The same goes for drinking too much, that can have a big impact [on mental health]. For me, exercise is a huge boost, because it burns off excess energy and makes me feel great. Talking to others that you trust is a really big help and, at the end of the day, people shouldn’t be afraid to talk about what’s going on for them. A certain amount of anxiety is normal in everyone’s life. There are ways to manage it and that’s what I’ve learned.”

Sarah is currently starring in Mother Goose, The Panto with the Pantaloons at glór, Ennis from December 21.

Fiona McGarry joined The Clare Champion as a reporter after a four-year stint as producer of Morning Focus on Clare FM. Prior to that she worked for various radio, print and online titles, including Newstalk, Maximum Media and The Tuam Herald. Fiona’s media career began in her native Mayo when she joined Midwest Radio. She is the maker of a number of radio documentaries, funded by the Broadcasting Authority of Ireland (BAI). She has also availed of the Simon Cumbers Media Fund to report on development issues supported by Irish Aid in Haiti. She won a Justice Media Award for a short radio series on the work of Bedford Row Project, which supports prisoners and families in the Mid-West. Fiona also teaches on the Journalism programmes at NUI Galway. If you have a story and would like to get in touch with Fiona you can email her at fmcgarry@clarechampion.ie or telephone 065 6864146.
Previous Alfa Awakens Wonder and Awe
Next ‘Devastating’ Outbreak of Bovine TB