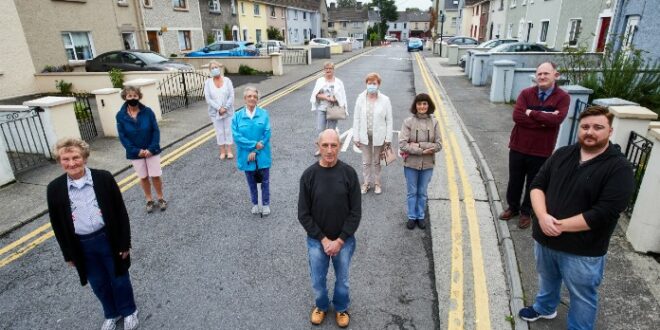 ANGER has been expressed by those living on of one of the last remaining residential streets in the centre of Ennis, over the introduction of two-way traffic to facilitate the new mobility plan.

Residents of Summerhill have told The Champion that the introduction of two-way traffic for the third time in recent years is the last straw in terms of noise, inconvenience and danger.

Nancy O’Brien who has lived in the town since the 1950s said residents are frustrated and in fear. “We have gone along with everything, up to now, for the good of Ennis,” she said. “We had two-way traffic to facilitate works on Parnell Street and two All-Ireland Fleadhs, now we have just had enough. People are speeding through the area and won’t let residents out into the traffic. They’re coming through at all hours and parking and blocking people in all day.”

Her son Brendan has made numerous representations to Clare County Council and said residents feel ignored. “Only Councillor Mary Howard came up here, along with a staff member, and that was just before the new system came into effect in May,” he outlined. “As residents of the town centre, we support town centre businesses, we’re the heart of the town and want what is best for it, but feel we are bearing a very unfair burden. Traffic flying up and down the hill and it’s a dangerous situation for all elderly residents as well as children in the area. While the council has argued the road is wide enough for two-way traffic, we don’t feel that it is because there are a number of pinch points.”

Mr O’Brien, who noted that a petition from residents had been sent to the council in July, said that greater use of the multi-storey car park in The Market, as well as initiatives like park and ride and traffic calming would be welcomed. “We have been promised an electronic sign and we’re still waiting,” he said. “We’ve had numerous minor collisions, residents being blocked in and delivery trucks coming through at all hours. We have been promised overlay works next year, but the bottom line is we have largely been ignored. There is a stakeholder group that residents should be involved with. We are not against any measures to support business, but we believe there are other options.”

Other locals who spoke to The Champion, said they had even gone so far as to walk in the middle of the road to slow traffic down. “We are fed up to the teeth,” said one woman. “It’s not safe for our grandchildren. This was never meant to be a main thoroughfare for Ennis, but it has become one because of this plan.”

Another resident questioned why councillors were not doing more. “Only two out of six replied when I emailed,” she said. “Things are absolutely crazy and dangerous.”

In a statement issued on the plan, Clare County Council emphasised that it is a temporary measure.

“During the Covid-19 pandemic it is essential to deliver measures to support residents, the business community and all citizens to access Ennis town in a safe, socially distanced environment as the town centre is characterised by narrow streetscapes and interconnected laneways with restrictive footpath widths,” it said.

“Clare County Council can confirm that the Temporary Covid-19 Town Centre Mobility Plan for Ennis is not intended to be a permanent measure. The council further confirms that if, in the future (and outside of Covid-19), there is any proposal around permanent pedestrianisation of any streets in the town, this would be subject to full public consultation.”

The full text of the council’s statement is below:

‘The Temporary Covid-19 Town Centre Mobility Plan for Ennis was formulated in response to the Government’s Roadmap for Reopening Society and Business, and the requirements for social distancing throughout all five phases of the roadmap. Clare County Council formed a stakeholder group to discuss and agree a plan to enable social distancing to occur in the town, which is characterised by narrow streets and restrictive footpath widths.

When considering a traffic management system for the Market Area when Cabey’s Lane exit is not available, a number of options were considered to enable traffic flow around the town. The introduction a two-way system in Summerhill was considered the optimal solution, in that the area has footpaths and double yellow lines on both sides of the street, and some residents have parking spaces in their front garden areas. The road width also meets the requirements for two-way traffic as set out in the Design Manual for Urban Roads and Streets (DMURS). There is also an existing traffic calming ramp at the Carmody Street side of Summerhill to reduce speed.

The present situation is that the two-way traffic on Summerhill is required under the Temporary Covid-19 Town Centre Mobility Plan for Ennis. The extent of usage of Summerhill as a two-way system is also dependent on scheduled works on the Ennis Public Realm: Parnell Street, Lanes and Bow-ways project when works commence on the Cabey’s Lane to Woodquay section, when this road would be closed by means of Section 12 of SI 119 of 1994 Road Regulations (Temporary Closing of Roads).

The safety of residents is always a primary consideration of Ennis MD when alterations to traffic flow are being considered and there is footpath access on both sides of Summerhill. Traffic monitoring and enforcement of illegal parking will continue as required.

On a separate note, please be advised that Summerhill is being considered for inclusion in the 2021 Roadworks Programme.’

Fiona McGarry joined The Clare Champion as a reporter after a four-year stint as producer of Morning Focus on Clare FM. Prior to that she worked for various radio, print and online titles, including Newstalk, Maximum Media and The Tuam Herald. Fiona’s media career began in her native Mayo when she joined Midwest Radio. She is the maker of a number of radio documentaries, funded by the Broadcasting Authority of Ireland (BAI). She has also availed of the Simon Cumbers Media Fund to report on development issues supported by Irish Aid in Haiti. She won a Justice Media Award for a short radio series on the work of Bedford Row Project, which supports prisoners and families in the Mid-West. Fiona also teaches on the Journalism programmes at NUI Galway. If you have a story and would like to get in touch with Fiona you can email her at fmcgarry@clarechampion.ie or telephone 065 6864146.
Previous Clare Senior Football Semi-Final Preview: Cratloe v St Breckan’s
Next Clare Senior Football Semi-Final Preview: Kilmurry Ibrickane v Lissycasey