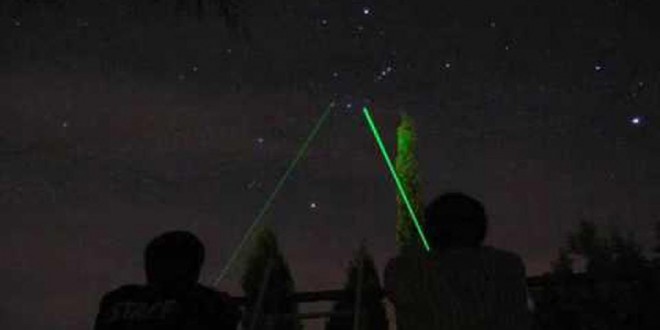 lasers being shone into the night sky can be extremely dangerous for aircraft.

A Search and Rescue helicopter operating in South Clare was the target of a laser attack earlier this week.

The Shannon-based Irish Coast Guard Helicopter was part of a rescue effort after a family became disoriented and lost in the Cratloe Woods area on Monday night. However, its efforts were hampered when it became the target of a laser attack.

In a statement on Wednesday, the Irish Aviation Authority said it had been in touch with gardaí following on from the incident.

“The IAA can confirm that Shannon Air Traffic Control received a report of a laser attack on a search and rescue helicopter at 23:51hrs on August 25, 2014. The IAA forwarded these details to An Garda Síochána.

“Laser incidents are where laser beams are deliberately shone at the cockpit of an aircraft by members of the public. Shining a laser at an aircraft can affect the safety of an aircraft, especially if the aircraft is at a critical phase, such as landing. While the majority of reported incidents have been found to have a low safety impact, pilots have reported flash blindness or glare from lasers. This activity is not exclusive to Ireland and is a worldwide phenomenon. It is the subject of many initiatives and discussion in international aviation and states have been instructed to take initiatives appropriate to their own airports and operations. Wherever possible, reports of these incidents are forwarded on to An Garda Siochána.”

The Irish Coast Guard/Department of Transport also issued a statement following the incident.

“This is an extremely serious offence with potentially lethal consequences, with added risk when a craft is in hover or close to the ground carrying out a winch. Not only are the crew in danger but there is also risk to the person being assisted.”

New legislation was introduced in June under which a person who shines a light that may dazzle a pilot or co-pilot can, upon conviction, be fined €5,000 or imprisoned for up to six months.

According to the Irish Aviation Authority Annual Safety Review for 2013, there were 158 laser incidents reported in Irish airspace last year.