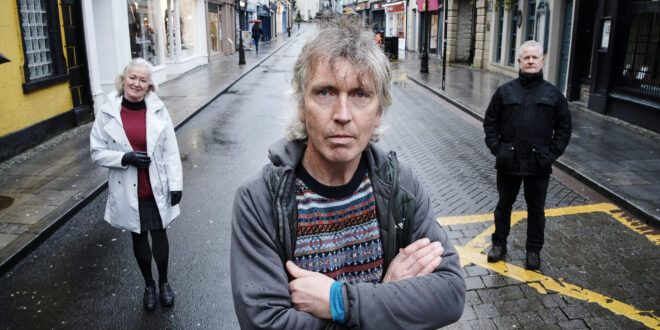 John O Connor, interim chairman of Retailers Of Ennis with members Mary Kelly, treasurer, and Martin Casey, secretary. They are calling for the reopening of the streets of Ennis. Photograph by John Kelly.

THE chairman of the Retailers of Ennis group has slammed Clare County Council’s policy of keeping O’Connell Street and Abbey Street closed in peak trading hours, something he says is killing business in the town centre, and will not help stop the spread of Covid-19.

The streets have been closed to vehicles to allow more room for pedestrians, which the Council claims will help limit the spread of Covid-19, but business owner John O’Connor says it is a nonsense. “The rationale the Council used is based on a fallacy, that if you walk a normal street landscape you have every chance of transmitting or contracting the virus. The logic behind that is a total fallacy. At the start there was an element of fear and total ignorance,

“What the Council have been doing is continuing with that ignorant discourse and trying to convince people, and they have a lot of people convinced, that if you walk the streets of Ennis you’re in trouble.”

“I went to a stakeholders meeting and I said that the logic for closing the streets is on a premise there is a serious possibility of contracting and transmitting the virus while walking the streets, which is a total farce.

“Look at the big metropolises of the world like Tokyo; people are on the streets but adhering to what they call risk aversion.

“To me risk aversion is cop on; cop on is not throwing yourself on top of people or embracing, keeping your distance and having respect.

“They can handle it in Japan with their population, but we get this diatribe from the Council that Ennis has narrow streets… it’s farcical.

“The ignorant discourse that we have been exposed to from the Council has to stop.”

Those with reduced mobility are at a serious disadvantage, he added, saying, “Heretofore they could park for five minutes and they could go to the bank for example.

“Now, there is total exclusion for elderly people and those with some kind of disability. The amount of anecdotes we’ve heard, people have told us they can’t come in any more because the people they bring in won’t be able to walk the distances that are needed now.”

A piece of street furniture now put on the edge of O’Connell Street is “horrible, aesthetically repugnant” in his opinion.

He also says that giving people a focal point to congregate, albeit in an outdoor setting is a poorly thought-out move from the point of view of limiting contagion.

The Town Centre is being strangled, he feels and the impression people coming in to town now get is to decide to go elsewhere in future. “They go to Roslevan or the Gort Road or someplace else they can do their business. I’ve talked to people who have businesses in those areas and they’re saying what in the name of Jesus is happening in town?

“We’re not operating with any equality because in other areas people can drive right up to the shop. We expect people to drop their car a distance away and then come and do business.

For well over 20 years now the idea of pedestrianising the Town Centre has been raised from time to time, and always vigorously opposed by traders. It has been far more popular among some executives in local government, and Mr O’Connor feels they are using the crisis to advance an objective.

“Even though they deny it wholeheartedy I believe they have decided this is an opportunity to bring it in, with the cover of Covid. It’s an awful misuse of the suffering people are going through to advance this cause.”

“The narrow footpaths in Ennis are less than two metres in width and therefore do not facilitate social distancing.

“The parklet was introduced arising from requests by persons with reduced mobility for a seating and rest area in the town. The feedback we have received on the parklet was overwhelmingly positive.”

It said that it is not currently seeking to bring in pedestrianisation permanently. “The Council further confirms that if, in the future (and outside of Covid-19), there is any proposal around permanent pedestrian-friendly measures for any streets in the town, this would be subject to full public consultation.

“The Temporary Covid-19 Town Centre Mobility Plan for Ennis was introduced by Clare County Council solely in response to Covid-19 and in line with Government guidelines on social distancing.

“The plan is designed to support residents, the business community and all citizens to access Ennis town in a safe, socially distanced environment as the town centre is characterised by narrow streetscapes and interconnected laneways with restrictive footpath widths.”

Owen Ryan has been a journalist with the Clare Champion since 2007, having previously worked for a number of other regional titles in Limerick, Galway and Cork.
Previous Speeding jetskis startled cow into throwing calf, says farmer
Next Clare asylum advocate optimistic over end to Direct Provision