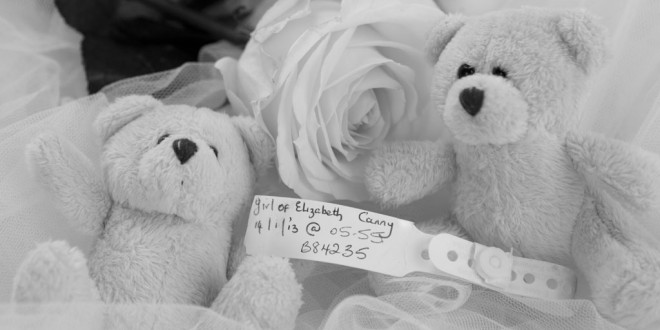 EARLY one morning in January 2013, midwife Liz Canny set off from her home in Quin for the University Maternity Hospital in Limerick. Her husband Aidan was driving because Liz, who was 34 weeks pregnant with their third child, had woken up earlier and knew her baby was on the way.

“I knew I was in labour and the baby was early and I had to get to the hospital. I remember meeting a colleague of mine when we arrived at the hospital and she said ‘you must be breech’,” Liz recalled.

“When we went into the labour ward and they couldn’t find a heartbeat, I knew straight away that it wasn’t good. They brought in the scanner and that’s not a good sign. Then they told us, ‘there’s no heartbeat’ and a consultant came in. It’s a bit surreal and you think ‘this isn’t happening’ and ‘how did this happen’. They were able to tell us from the scan that it had happened very recently.

“I knew the baby was five and a half weeks early but that’s not that early. You get to 12 weeks and then you get to 24 weeks, which is a viable age, and then you think after you reach 30 weeks, well they can do so well at that age. So, it’s just a shock and you just never think it will happen to you.

“My body was almost completely in shock and I remember thinking I can’t do it but I had a very good midwife and she really looked after me. Eimear was born about an hour after we went in.

“You hear the labour ward, all the little cries, and you expect she’ll move, you think she’ll kick her legs now like a newborn lamb,” Liz said.

“She was perfect to look at, she just didn’t have life and, as we said, apparently it had only just recently happened to her, so she had developed to be a viable person,” said dad Aidan.

The baby was put in a cold cot in one of the antenatal wards, while the couple waited for a post-mortem to be carried out. They were told about Now I Lay Me Down To Sleep, where a professional photographer goes to the hospital or the parents’ home and takes remembrance photographs of the baby. Liz decided straight away that she wanted the service.

“I remember a nurse rang me from the maternity hospital, clearly upset and she said to me, ‘the mum’s one of our own’,” said Louise Brooks. “I didn’t realise it at the time but I had taken Liz and Aidan’s wedding photographs and I knew her as Liz Clune. When I spoke to Liz because of the delay for the post-mortem, we agreed that I would come to their house on the following afternoon where we would do the photographs.”

Louise arrived at the Canny house before Liz and Aidan arrived home with baby Eimear and took the time to speak to the grandparents and set up a bedroom for the photos.

“When they arrived home, we started the photos of Eimear, Liz and Aidan; then their two little boys, James and Dominic. You can imagine two young lads, unaware of a lot of what was going on,” Louise recalled.

Liz noted, “I remember Louise asking ‘would your mum like to get a photo taken with baby Eimear’. I wasn’t sure. I knew Aidan’s parents would but mum did get one done and she has it in her bedroom now”.

“Her mum went into the pictures and they were really lovely. They were three generations shots of the granny and Liz and little Eimear. There were tears shed by all and they all supported each other,” said Louise.

“It’s a lovely thing when you go to family members’ houses and they have Eimear’s photo up. It’s like they remember her and that’s important. I have a friend and when I go to her house she has the acknowledgement card in her kitchen with a picture of Eimear. It’s just very important to you,” she added.

“We only get to talk about Eimear around the time of her anniversary, while other people get to talk about their kids all of the time. But it’s important to you that you had this baby and you want people to know, your friends and your family. You don’t want to not be able to talk about her,” Liz said.

“Some people can’t talk about it, a few of our friends, we’d have noticed couldn’t deal with it or find the words for it. I’ve no doubt that they wanted to be there and to support us but they just couldn’t find the language to put on it and couldn’t deal with the photographs. Then more, as Lizzie said, they embraced it, so people are different,” Aidan said.

“I was fifty-fifty about whether we’d go for the photos,” Aidan admited. “I was kind of struggling dealing with it anyway. I wasn’t mad for it – wrongly – but I suppose, Lizzie more so said yes we’ll do it. I wasn’t against it but I don’t know if I would have embraced it to the degree that Lizzie went with it. I don’t think I’d have done a photo of the five of us, if it wasn’t for the setting that Louise brought to it. It felt a bit more correct or normal doing it that way, as opposed to asking any of the family to take a photograph. We wouldn’t have if it wasn’t for the service provided by Now I Lay Me Down To Sleep,” he said.

“James is five and Dominic is three now and I’m sure he would have very little memory of the time but James does and he does talk about Eimear and the photographs, and they look at the photographs,” Aidan added.

“I think the photos help,” Liz said. Even yesterday, I heard James telling Dominic ‘there’s baby Eimear now and she’s dead’. He said, ‘oh yea that’s baby Eimear’, and they have photos of her with them in their bedroom and I’m sure they have the memory of that time,” Liz said, adding, “before Christmas, James asked me will Holy God be able to bring the Smyths catalogue up to Heaven because Heaven is a long way away; it’s further than Dublin.”

“James just started school this year and the children had to bring in a photo of the family and I let him pick one out and he picked one of Eimear, one of the five of us. I was a bit worried because I hadn’t spoken to the teacher about Eimear but when it was his turn to talk about his family he said, “This is my family, this is baby Eimear, she’s dead. She’s in Heaven’. I asked him what teacher said and he told me they had photocopied the photo and put it on a wall and teacher said, ‘we’ll all say a prayer for baby Eimear’. He was delighted that his teacher acknowledged it,” she said.
Liz said she often goes back over the photos and a particular picture will catch her eye and she’ll go into the Ennis Fuji Centre. Owners Niall and Ann Considine, who are bereaved parents themselves, offer complimentary printing of the photographs for Now I Lay Me Down To Sleep.

“Niall was so super that first day that I went in because of his own personal experience. Eimear has a file in the Fuji Centre and I go in often, maybe for photos for the Christmas tree, or I might say I’ll get another one done in colour or black and white. It’s something you go back to. It’s not just you get them done and you’re finished with them. I’ve often gone in to get reprints just to change the photos around. They’ve become very important, maybe more important than they initially were when we took them, they’re something that we have with us, a memento.

“You leave the hospital with nothing really, with your baby in a box. The photographs do help you, they definitely help you. I suppose the focus was, for me, instead of organising a christening I wanted to do a nice memorial card for her and that was a focus for me for a while. You have all these milestones; then it was waiting for the post-mortem to come back and then thinking should we go for counselling, and then should I go back to work, they were all points that hit you. You become a very different person, it does change you,” she said.

The couple later learned that Eimear had died from a cord accident.

“Initially you don’t want to go out and go to a different place to shop because you just don’t want to meet people. But people are amazing, they’re very good. The two trees we have in the garden were given to us by people to remember Eimear and we’re going to do a garden for her. We’re trying to hold on to things that will keep her memory alive. On her anniversary we make a birthday cake and take down the photos and talk about her,” she said.

Liz is particularly conscious of the need for families to talk about the loss of a child and is urging anyone who is hesitant about getting remembrance photos done to go ahead with the pictures.

“My advice would be even if you think it’s too morbid or I don’t want to do it, do it. The images will be there and can be deleted if you don’t want them. But you can’t go back, because you have such a narrow timeframe. It’s not like something that you can go back a month later and say we’ll do those photos. You have that window of opportunity and if you don’t do it, you definitely would have regrets. I think, in the majority of cases, it does become very important. It has to us, even in ways you don’t think about down the line,” she said.

While speaking to the couple about the loss of baby Eimear, Liz is holding their month old daughter, Evanne, who is sleeping on her lap.

“Evanne is her own person, she’s not a replacement for Eimear but it will be nice to explain to her that she had an older sister. It’s not just me telling her, I’ll be able to show her, she can physically have an image to look at and that’s important. You join a club when you lose a baby and it’s the kind of club that you wouldn’t wish it on your worst enemy.

“At work now, when I hear of it happening, I have so much more empathy. I just know the road ahead and nobody can do it for you. You just have to plod it out and do the footsteps and do the walk and it’s not an easy road.

“You’ll have good days and bad days, there’s no easy way of getting over it really,” Liz concluded.