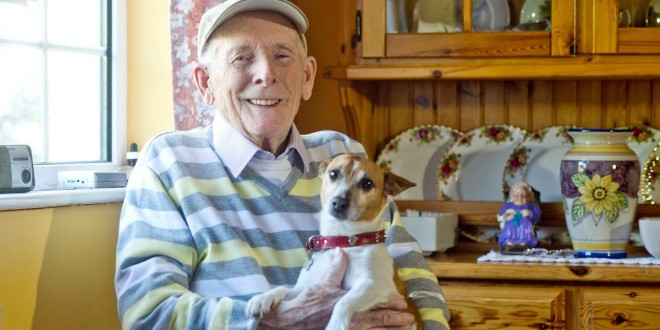 ONE of Clare’s best-known GAA supporters passed away recently. Kevin Stapleton, who was 92, was born in Limerick and reared in Kilkee but lived and worked for 46 years in England. Resident in Ennis since his return to Ireland in 1989, he was a regular at Clare hurling and football games. He was also a colourful contributor to The Clare Champion letters page.

In an interview with The Clare Champion in October 2012, Kevin recalled growing up in West Clare.

“I was born in Limerick but I was in Kilkee at nine weeks old. My mother died at birth, so I never saw her,” he recounted sadly.

Kevin and his twin brother, Thomas, were reared by their grandmother, Bridget Stapleton, whom they treated as their mother. She was a woman with straightforward convictions, as evidenced by Kevin’s name change around the time of his confirmation. It turns out his name was not actually Kevin.

Kevin finished school at 14 and had to scratch a living out before emigration reared its inevitable head.

“I worked for Clare County Council in Tullaher Bog, cutting the turf, saving it and putting it out. That was around 1939 or 1940. They used to carry it in lorries down to the West Clare Railway and pack all the turf in. As well as that, you might get a couple of weeks in Haugh’s Quarry in the Dunlickey Road,” he recalled.

His days were numbered in Kilkee, however. The boat to England had a spot for Kevin Stapleton.

“I had to go. I didn’t have a job. These bits of jobs were in the summer time. I was 21. Five or six of us used to stand down at Kent’s corner. That’s where Haugh’s is now. Then there was the hole in the wall where the fairground is now. There was a bit of a wall that would block the wind from coming up. Then there was Brew’s Corner. That was our side of Kilkee. The other side of Kilkee was up in Stella Maris,” he said wistfully.

“At a quarter to nine of a September morning in 1943, I got on a bus outside Scott’s [in Kilkee]. We were met in Dublin by an agent and brought to a hostel. The next morning we were away for Dun Laoghaire to the boat. We landed over in Holyhead. Of course, it was all blackout then in the evening time,” he vividly remembers.

“That time, when I emigrated, it was like going to Australia because it took you 24 hours to get to London from Kilkee,” he noted.

On arrival in England, Kevin was fumigated and then showered, before being brought to Taunton in Somerset near an airforce flying field.

“I was working for John Laing [Civil Engineering]. We had a camp there. We were on about two shillings an hour and you got your lodgings. We were there a few days and the next thing we were moved. We were brought down to a place called Truro in Cornwall.”

Kevin married his first wife, Glennis (RIP), 62 years ago. She passed away while they were visiting Kilkee in 1985. He subsequently married his current wife, Philomena, who lived in Ennis with him.

Kevin left the building sector in 1957, working for the Firestone Tyre Company in Brentford and later for British Airways.

“I did 20 years of nights there. 10.30pm until 7am but some nights you’d get away at 4am. The aircraft would come in for tyre changes. I was an odd job man,” he said, adding that he retired in 1987, returning to Ireland two years later.

Throughout his long life his love of Gaa has never left him to the extent that he regularly tried to pick up the Radio Éireann signal in the UK in an effort to stay in touch with what was happening GAA wise.