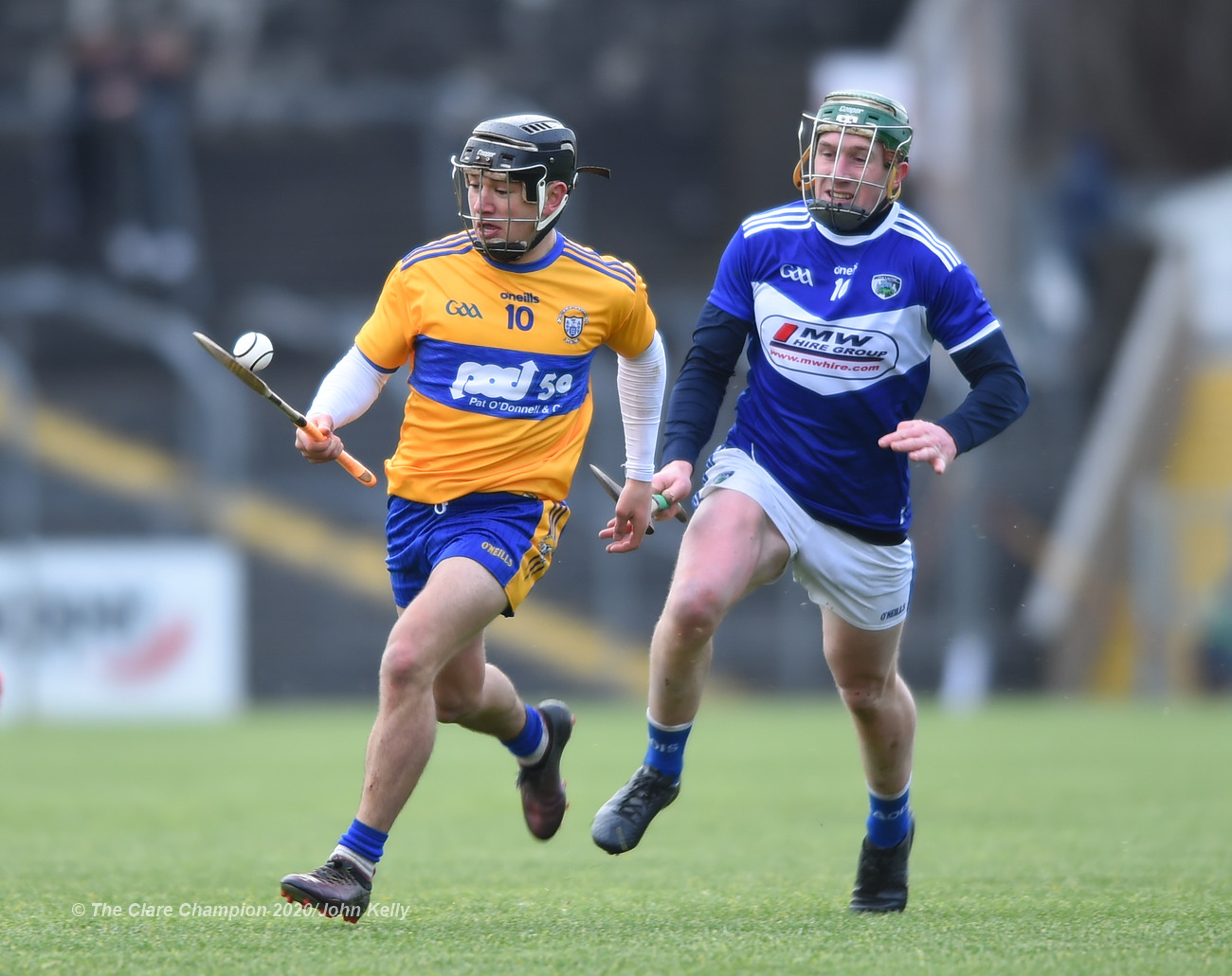 David Reidy of Clare in action against Willie Dunphy of Laois during their National League game at Cusack Park. Photograph by John Kelly

For David Reidy, the wait to return to intercounty championship action has been longer than most.

The Eire Óg sharpshooter opted to take a break from the county panel for the 2018 season in order to focus on his studies, which culminated in him securing a job in the marketing department of LIT.

His return to the set up for the 2020 season was cut short with the outbreak of Covid-19 but with the championship now on the horizon, the focus is on the challenge that lies ahead with neighbours Limerick.

Ahead of the start of the 2020 championship, Reidy feels there is still some trepidation among players surrounding Covid-19 concerns. He is happy that all efforts are being made to ensure that all involved are kept as safe as possible, but stressed that there is no room for complacency in those standards.

“It seems to be a really mixed opinion to be honest and we saw that in the results of the GPA survey. There was a quarter of respondents who said they would be happy to continue if more protocols were introduced but we need clarity on what those will be. If you had asked me a few weeks ago, I would have been a little more hesitant but as we get closer to it now, you just have to focus on the fact that there will be a championship happening and look forward to that. The protocols in place at the moment in Clare are helping to do everything we can to keep the virus at bay. Every day we go training we have to complete the health survey, we are getting temperature checks, dressing rooms are off limits, the medical people are all kitted out with PPE, anyone getting treatment is given their PPE and sessions are all outside”, he noted.

Reidy missed out on the opening round of Eire Óg’s Clare senior hurling campaign through injury but played a key role in their run to the last four. He feels having the club championship to view was a positive for the county management and says new faces to the panel are making a big difference.

“In fairness to Clare GAA, the club championship was run off as smoothly as it could have been. Everyone was able to showcase what they have to offer and it allowed the county management to get that insight into some new players and bring in those new faces. Those lads are all now chomping at the bit to get going this weekend. Intensity has really started to ramp up a bit now, particularly in the games between ourselves. There is a real bite there at the moment and things are really where we want them to be as we are just days out now from the championship. There are some great positives to take from that and bring to the weekend. We can’t be looking back on who is gone, the focus has to be on who we have available to fill that void, and throw up their hand for Sunday. No matter who is on the field it is going to be a massive test, and it will take more than 15 players that will be needed to get things right on the day. Clare v Limerick is that intense rivalry and while we know what happened last year, we cannot forget about what happened in 2018 too. That is what we will be looking to bring on Sunday is that kind of intensity and battling to get the win” he said.

There is also a National League medal on offer for the winners of Sunday’s tie, but Reidy, who was part of the Clare squad who won that title in 2016, feels it is not something that will be of concern to them this time around.

“From my own point of view, I am not sure if that is something that will be to the forefront of the mind. It is a National League medal but at the end of the day it is all about championship. No one is going to remember much about the league if an All Ireland or Munster championship is on the line so we are just focused on the championship element. Getting a league medal has not even come into our thoughts and that won’t be changing. Championship is all that we are focused on” he stated.