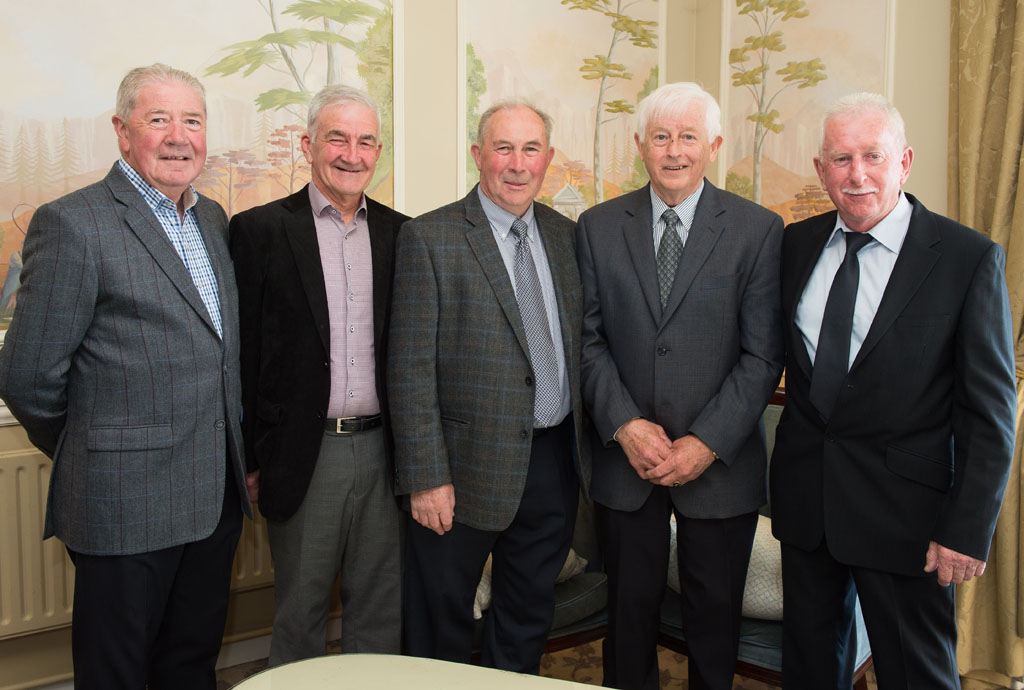 DJ Meehan, John ' Leary, Michael Kilmartin, Paddy Mc Namara and John Mc Mahon at a reception at The Inn At Dromoland to celebrate the 50th anniversary of the Newmarket three-in-a row hurling championship winners in 1967,1968 and 1969.

Newmarket’s dominance of Clare hurling in the late 1960s was recalled this week, when the members of the club’s three in-a-row championship-winning teams of 1967, 1968 and 1969 were feted at a function at The Inn in Dromoland.

It was a particularly successful period for the club as, in addition to the three championship titles, they won four Clare Champion Cups from 1966 to 1969, while they became the first in Clare to win the Munster club title, when they defeated Carrick Davins from Tipperary on October 6, 1968 on a scoreline of 3-9 to 2-7.

Mike O’Leary was one of a number of brothers who was part of those successes. He told The Clare Champion, “Our idols were the people who played in the 1920s and ’30s. They were legends in our eyes. They had great time for us and they talked to us and supported us. The teams from the ’40s and ’50s hadn’t the same aura”.

According to Michael, “Jimmy Halpin was an excellent trainer and he trained a lot of those successful teams. The late Mick Arthur trained the ’69 team, with the late Fr Tim Tuohy as coach. Newmarket ran up a big score in the replay of that final.”

Having achieved so much success in the ’60s and ’70s, the fact that the club has failed to win many titles in the modern era must be disappointing?

“These are different times. In the past 10 or 12 years they haven’t been far away but they probably needed a couple of exceptional players. From 2005 until now, I have really enjoyed the hurling but we only got one championship in that time but there was a pretty good effort. In the ’60s and ’70s we played a number of teams from other counties and felt we could hold our own against them. They were wonderful times and it’s great to meet up.

“When times were tough, hurling lifted the gloom and kept us all going and we always enjoyed a great following. Everyone was involved,” he added, before singling out Newmarket’s annual home and away matches with Patrickswell from Limerick for special mention.

“There was always a great relationship between the clubs and it’s there to this day,” he concluded.

Newmarket’s dominance of Clare hurling in the late 1960s was recalled this week, when the members of the club’s three in-a-row championship-winning teams of 1967, 1968 and 1969 were feted
Previous Increase in Clare electoral register
Next Inquiry into CervicalCheck Screening Programme