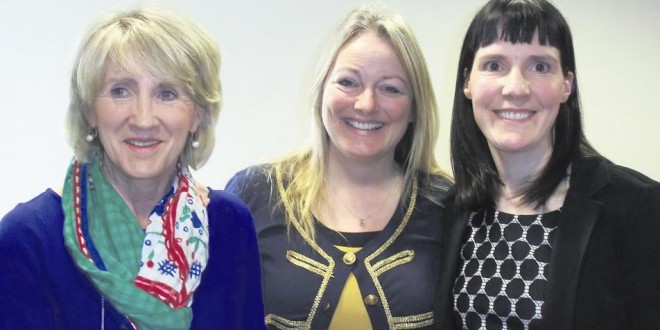 RAPE Crisis Midwest is facing a “significant” shortfall in funding this year, with no funding for overheads or rent for their Ennis centre at the Tracklands Business Park.

The organisation recently launched a range of promotional products in Glór, with the aim of highlighting the centre and raising funds to allow the valuable work of the organisation to continue in the Mid-West.

Over 70 guests attended the launch, with the event attended by public representatives, staff and volunteers of Rape Crisis Midwest, press, An Garda Siochána, Child and Family Agency and other charitable organisations in the locality.

The promotional items were purchased after the organisation received a grant from COSC, the National Office for the Prevention of Domestic, Sexual and Gender-based Violence.

The guest speaker was Marie Donnellan, in her last formal role as Clare Rose. Marie is following the tradition of many other Roses in establishing a relationship with Rape Crisis centres.

“We are only part-funded by the Department of Family and Children. For example, we do not receive funding for the overheads and rent connected with the centre in Ennis and must fundraise to bridge that deficit, amongst other things. All staff are taking at least one month’s unpaid leave this year, to help with the shortfall. It is being done in such a way as to ensure that the doors are not ‘closed’ but staggered over the year.

“We work to a tight budget, with a limited number of staff – we have the equivalent of just over five full-time staff in the entire Mid-West and have approximately 85 people coming through the doors every week. We rely heavily on volunteers to help deliver our services.”

Speaking at the launch, Marie, the Clare Rose, said, “I have always been a supporter of the centre and the great work they do. I am delighted to be a part of this event.”

Anne Ginnane, counsellor and psychotherapist with Rape Crisis Midwest, also said a few words at the launch. “The Ennis centre serves the entire population of Clare, which is 116,000 people. The services we provide are vital to our local community,” she stated.

All of the promotional products were on display and the event ended with one or two notable figures sporting bright red Rape Crisis Midwest tee-shirts. The Ennis Centre was opened four years ago and provides a wide range of free support services to all survivors of sexual violence, as well as offering free training and educational programmes to local schools, colleges and businesses.

No time for drama as councillors hold monthly meeting at Glór