LECTURES, parades, book launches and commemoration ceremonies will be celebrated as part of a comprehensive programme in Clare to mark the centenary of the 1916 Rising.

In total, 66 actions, covering seven strands, reflecting the themes adopted for the national programme were unveiled in the Clare schedule on Thursday in Dublin.

The two main actions associated with World War I – the Clare Peace Park initiative and the Merriman Summer School, themed Ireland’s Gallant Allies in Europe – will be among the highlights of the local programme. It will include a focus on two men who are associated with 1916 in Clare – Con Colbert and Peadar Clancy.

The official Clare County Council event is the re-development of the site commemorating the 50th anniversary of the 1916 Rising at the Club Bridge in Ennis. It is planned that there will be a re-launch of this site in early May 2016.
The sub-committee meeting of the Cultural, Arts, Community, Recreation and Amenity Services SPC adopted the draft programme recently. 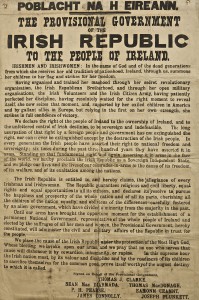 1916 coordinator and county librarian, Helen Walsh told a Strategic Policy Committee meeting recently that the planned collaboration with schools and events would appeal to both adults and children.

“The aim of one year of dedicated activities is to impart knowledge and understanding of the events leading up to the Rising, to put it in the context of world history and what was happening in Europe at the time and to leave a lasting memory in the children and youth of today who live through the commemorative year and gain a stronger sense of what happened in 1916 and what has made Ireland the country it is today,” she said.

“It was agreed at the last sub-committee meeting that the group would stay together for the life of the present council in order to track the commemorative history of the period of 1917 onwards,” she added.

The 2016 Office in Dublin, in collaboration with the 1916 co-ordinator in Clare, met the public in open consultation forums over four nights in early June in Ennis, Shannon, Kilrush and Scariff.

The sessions were attended by about 100 people over the four nights, while application forms for funding for the community strand were distributed on the night and made available online.