Home » News » Quin resident to be extradited to UK 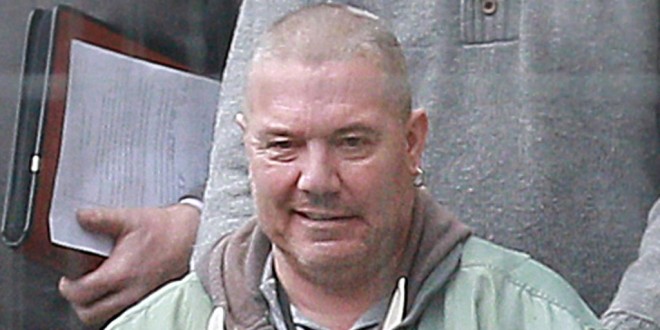 David Warwick, a UK national with a Quin address,leaving the Four Courts. Photograph by Paddy Cummins/PCPhoto.ie

Quin resident to be extradited to UK

A MAN who has been living in Quin and was due to be extradited to the UK, has been arrested and brought before the High Court after he failed to present himself at a Dublin Garda Station.

The court heard that wheelchair-bound David Warwick told gardaí the reason he didn’t travel to Dublin was because he was feeling unwell and he was going back to bed.

Last month, the High Court ordered Mr Warwick, a UK national who had been living at Quin Gardens in the village, to be extradited to the UK where he is wanted for an alleged breach of the terms of his release from prison.
After the extradition order was made, Mr Warwick was released on bail pending his extradition to England by ferry.

As part of his bail conditions, he was required to travel to Dublin and present himself to the gardaí at Store Street Garda Station at noon last Monday.

Arising from his failure to show up, the State applied to the High Court for a bench warrant for the arrest of Mr Warwick.

On Wednesday Mr Warwick, following his arrest in Clare by members of the Garda Extradition Unit, appeared before Mr Justice Tony Hunt at a vacation sitting of the High Court.

The judge ordered that he be remanded in custody until he is surrendered to the UK authorities.

The judge ordered that the extradition take place no later than April 22 next.

The judge also said that the authorities at Cloverhill Prison should take steps to cater for Mr Warwick’s medical needs.

On Tuesday, applying for the bench warrant, Detective Sergeant Jim Kirwan of the Garda Extradition Unit told Mr Justice Robert Haughton that he contacted Mr Warwick by phone on Monday afternoon after he had failed to show up.

Detective Sergeant Kirwan said Mr Warwick also informed him he had rang a number and informed somebody at Garda Headquarters that he would not be going to Store Street.

Detective Sergeant Kirwan said while the number was in fact a valid number for Garda HQ, he was certain that whoever Mr Warwick spoke to would not have had any knowledge of the matter.

He added that Mr Warwick also told him that he had attempted to contact his solicitor.

Mr Justice Haughton said while there had been attempts by Mr Warwick to make contact with a solicitor and the gardaí, he was satisfied to issue the warrant for Mr Warwick’s arrest.