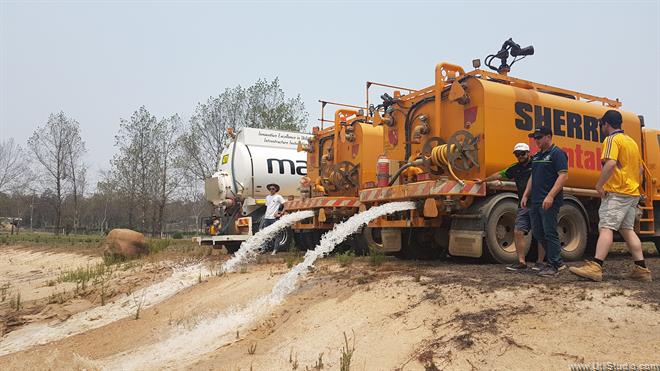 DROUGHT-stricken farms and businesses along the Australian Gold Coast have been the beneficiaries of a major relief effort involving two Quin natives in the run-up to Christmas.

Thirty-four year old Barry O’Halloran who runs Quin Construction in Brisbane was joined by his younger brother Paul on the Brisbane Irish Drought Run on Saturday, December 21. An unprecedented wildfire outbreak across the continent prompted an appeal to tradespeople to lend their time and their vehicles to relief efforts. The drought run organised by members of Brisbane’s Irish community saw up to 100 trucks travel the 200km route to the drought-ravaged rural town of Stanthorpe, taking water and essential supplies.

The Christmas convoy transported a total of 170,000 litres of drinking water and 300,000 litres of water for livestock, as well as 50 bales of hay and 49 pallets of animal feed.

“The Irish community here is a fairly small one and the call went around for people to get involved in helping out with the drought response,” Barry explained. “People were asked to provide whatever help they could, so I got in the truck and Paul joined in for the spin.”

Barry, who has been in Australia since 2011, made the generous decision to give up family time with this New Zealander girlfriend Nicole Clark and their four-month old son Louie to take part in the run. He and Paul were tasked with taking 10,000 litres of water to a winery in the tiny town of Ballandean in a region known as the Granite Belt. The heat proved to be something of an obstacle, but the convoy persisted.

“Trucks were overheating along the route, the heat was intense,” Barry said, “but the run was really well organised and everyone was given an address to deliver to – cattle stations, houses or businesses. We got the Hidden Creek Winery which was pretty badly affected by the drought.”

The grateful manager, Andy Williams, later got in touch with Barry to thank him for the delivery which made a huge difference to crops severely affected by record temperatures and an unprecedented decline in rainfall levels. Mr Williams also outlined how the winery itself narrowly escaped destruction in September when power lines sparked in the wind and started a fire.

““[The fire] was fought by several rural fire service appliance on the ground, but they struggled to control it,” Mr Williams said. Had it not been for aerial bombing planes and helicopters who put the fire out, we would have lost the vineyard and buildings,” Mr Williams said. “These aircraft are not normally in the area and were brought in just three days prior to fight the fire just north of Stanthorpe. We dodged a bullet and are very lucky.”

Since September, temperatures across Australia have been soaring, creating drought conditions and sparking scores of wildfires. Every state has exceeded 40 degrees centigrade over the course of the crisis, and Barry is hopeful temperatures are easing off.

“We had temperatures in the 40s before Christmas,” he said. “Driving construction machinery means you have air con, but once it gets to a certain temperature, people are told to go home, it’s too difficult to work.”

To-date, New South Wales is the worst-affected Australian state. There, fires have burned more than 4 million hectares and destroyed more than 900 houses. Australia broke its all-time temperature record twice in December. An average maximum of 40.9C was recorded on December 17. That record was broken a day later by a temperature of 41.9C.

Fires have so far claimed the lives to ten people have across Australia. These include three volunteer fire-fighters.

Fiona McGarry joined The Clare Champion as a reporter after a four-year stint as producer of Morning Focus on Clare FM. Prior to that she worked for various radio, print and online titles, including Newstalk, Maximum Media and The Tuam Herald. Fiona’s media career began in her native Mayo when she joined Midwest Radio. She is the maker of a number of radio documentaries, funded by the Broadcasting Authority of Ireland (BAI). She has also availed of the Simon Cumbers Media Fund to report on development issues supported by Irish Aid in Haiti. She won a Justice Media Award for a short radio series on the work of Bedford Row Project, which supports prisoners and families in the Mid-West. Fiona also teaches on the Journalism programmes at NUI Galway. If you have a story and would like to get in touch with Fiona you can email her at fmcgarry@clarechampion.ie or telephone 065 6864146.
Previous Clare bow out of Munster Hurling League with loss to Limerick
Next 92 patients on trolleys at UHL