JUST 24 people have ever flown to the moon and one of the exclusive club was in Shannon last Thursday, where he spoke to children at St Aidan’s and St Caimin’s national schools.

Al Worden was command module pilot on Apollo 15 in July 1971, alongside commander Dave Scott and lunar module pilot Jim Irwin. During his time in space, he entered the record books as the most isolated human being ever, at times being 3,600km away from his companions.

Addressing children at St Aidan’s National School, he said that one of them could be among the first humans to go to Mars, if they persist with education.

“When you get through college, you’re going to be the right age to go to Mars. Some of you may be able to do that and that’s going to be a very cool thing to do. It took me two weeks to go to the moon and come back. Going to Mars is going to be a year and a half, so you’ve got to be prepared for a long, long time in space. But I think you would enjoy it and I think it would be great fun.”

On the possibility of travel to Mars, he said it is only a matter of time until man visits the Red Planet.
“Mars is just another step up there, it’s not that big a deal. We could have gone to Mars 40 years ago if we had really wanted to but we started the shuttle programme and that kind of killed the Mars thing. We could go to Mars tomorrow; we’ve got the capability to do that. They’re going to have to build some vehicles to do it but that’s down the road. I think the US will be sending a flight to Mars within 30 years. That’s in the range for these kids to be educated to go. The Chinese might get there a little sooner, we don’t know.”

Scientists have long discussed the possibility that alien life exists and Mr Worden said that he believes it does, given the incomprehensible size of outer space. He also said that mankind will eventually make contact with other life forms.

Apollo 15 took off on July 26, 1971 and 45 years later, Mr Worden said, “We were at the moon for six days. I carried two guys with me, Dave Scott and Jim Irwin, and they flew with me to the moon. They got in their little lunar module, went down to the surface of the moon, they walked around and they picked up rocks. That was their big job, all they had to do was pick up rocks. While they were doing that, I was in lunar orbit going around the moon once every two hours, taking lots of pictures of the moon, lots of camera work, lots of visual stuff, looking out the window to try and describe stuff that I saw on the moon and looking at the star patterns out there. That is an amazing thing.”

Taking off on a longer journey than anyone has been on before, leaving the planet you come from and being more isolated than anyone has ever been in history seems hugely daunting to the layman. However, Mr Waldron said that because of the quality of training and the time spent preparing, he wasn’t afraid when he set off on one of history’s greatest journeys.

In fact, he actually compared flying to the moon to driving a car.

“We were the same way on the flight. We went through the training 500 times for everything we did. By the time we got on the flight, it was like doing it all over again.”

Again and again at St Aidan’s National School, he returned to the importance of education and spoke about his own schooldays, at a far smaller school.

As numbers were so small in his alma mater, he was exposed to learning that was advanced for his age.

“I got in the space programme because I decided I really wanted to do something with my life that was different from the way I grew up. I grew up on a small farm, where I had to do all the work from the time I was 12 until I went to college at 18. I had to milk four cows, had a bunch of chickens and pigs and ducks and all kinds of things, I had to take care of all of them.

“I went to a little school and there were seven grades in it but it was no bigger than this room. It was called the Little Old Country Schoolhouse. There were only two of us in my grade. We were in the classroom with the bigger kids and we listened to them do their studies and that really made a big difference to me. I learned stuff that if everyone was my age, I wouldn’t have learned for another two or three years. I got ahead of things back in those days.”

Third-level education in America is less easily accessible and far more expensive than here but he was able to go to college, despite having a relatively deprived background and feels anyone can go if they really want it.

“Anybody can go to college if they put their mind to it. We didn’t have any money to go to college when I was a kid, so I applied to the military academy in the US at West Point, New York. I had good grades in high school and I did a lot of other stuff so I went to West Point. That started my career. When I graduated, I went into the air force and I learned how to fly. I didn’t know whether I’d like it or not but when I got in an aeroplane, I was pretty good. I flew for a bunch of years and then went back to college. I knew that if I wanted to advance to be a better pilot, I had to go back to school.

“I guess the point is study whatever you think is important to you, whatever you love to do and go as far as you can with it because when you get to the end of that road, you’re going to find that other doors open that are maybe not exactly what you wanted but are going to be really good for you,” he concluded 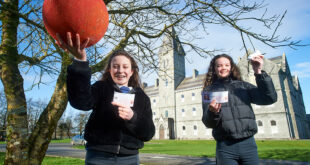 St Flannan’s College is out of this world 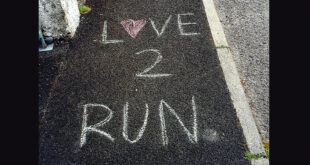