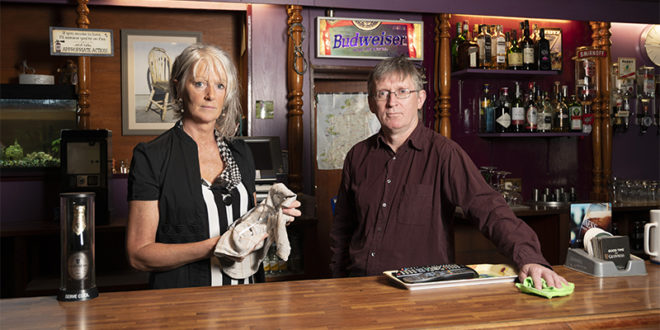 Having made good use of the downtime by deep cleaning and redecorating the premises, Martin Butler and Susan McMahon are anxious to reopen the Cobbler's Rest in Bodyke. Photograph by Eugene McCafferty.

Publicans plea for chance to prove they can open responsibly

THE proprietors of an East Clare pub are appealing to the government to give them the chance to prove they can re-open and operate safety. Susan McMahon and Martin Butler have been running The Cobbler’s Rest, a so-called ‘wet’ pub, in Bodyke for the last 16 years. They have expressed anger at the fact that while they are sticking to the rules, a number of pubs are flouting regulations on serving a substantial meal, in order to stay open.

Like all other pubs who don’t serve food, The Cobbler’s Rest has been shut since March on the direction of government and The National Public Health Emergency Team (NPHET).

Its proprietors have seen three false dawns and been preparing to re-open at different stages in July and August, only to have their hopes dashed at the end of last month. “I don’t think they’re going to let us open at all this year,” said Mr Butler. “It’s desperately unfair. Every pub should have been allowed to open at the same time and been made to stick to the rules. I’ve been a publican for the last 18 or 19 years and now, basically, they’re saying I can’t stick to the rules. I’ve always run a decent pub and now I’m being told that I can’t run the pub under the same rules as other [food] pubs. It’s desperately unfair. We deserve a chance to open. If the government want to make the rules stricter and give more power to the Gardaí, that’s fine. We’ll keep the rules. I feel so angry that I haven’t been afforded a chance by this government or the previous one. We just want a chance.”

The Cobbler’s Rest was described by Ms McMahon as “a good country pub” and a place that offers a public service at a time of changes and challenges. “If there a birth or a marriage or a death, it all centres around the Cobbler’s,” she said. “ That’s especially true for the older people, who would have come in to catch up on the local news. I think that’s what people are missing most, that sense of connection. We’ve seen fairly big changes in the village with the loss of our post office and more recently our shop. The pub is one of the only surviving businesses in the village. You can’t buy a paper or an ice cream in the village at the moment.”

Mr Butler believes that situation for rural pubs isn’t fully understood in the corridors of power. “Up to 70% of pubs in Dublin are open compared with 30% of rural pubs,” he noted. “I think the government has let that go because it’s a very Dublin-centred cabinet. It’s decimating rural Ireland.”

The publicans are confident that, if allowed to re-open, they have the facilities to ensure social distancing. “We have a lounge bar area,” Mr Butler explained. “We would only open that on special occasions in the past, but now we can open that up, so there’s plenty of space and there’s no problem with social distancing.”

While The Cobbler’s remains closed, its proprietors are keenly aware of the pressure on them to mould their business to the new rules. Asked if he has been tempted to do what many other pubs are doing, Martin said, “Many a time. I meet my customers and they’re asking why I don’t open up and serve food. Others are saying, ‘fair play for not opening up’. We’re caught in the middle.”

Ms McMahon said that serving food is not something they would do lightly, given the regulations on environmental health, as well as the licence renewal process.

“We can certainly understand other people’s frustrations,” she said. “I can see why some people are chancing it. Ducking and diving and darting wouldn’t suit us. We could do some sort of food, but we don’t have a HSE-approved area.  We looked into this before an a kitchen could cost €40,000 or €50,000. We have a kitchen in our house next door. I know in my heart and soul that wouldn’t be acceptable if we were inspected, but we could chance it. I personally don’t feel comfortable about flouting the regulations to that extent.”

“If you divide €15 million by 3,500 pubs, there’s not a lot to support people with partners and families,” he said. Ms McMahon added that, even if they were able to re-open The Cobbler’s in the morning, many challenges would remain.

“We do reasonably well in comparison to some rural pubs,” she said. “In reality, though, our business depends on parties. All the 21st and 30th birthdays, the parties that go alongside weddings, and gatherings after funerals aren’t allowed now. We’ve had great generosity from our landlord, and we’re so grateful, but we will have to pay our rent whenever we re-open, as well as all the overhead, the likes of Sky and all of that.”

“The annoying thing about all of this is that we’re playing careful and have stuck to the rules and now this is now we’re being treated, as if we’re idiots who can’t run our pubs as well as those who do food. That’s the most frustrating part of it.”

Fiona McGarry joined The Clare Champion as a reporter after a four-year stint as producer of Morning Focus on Clare FM. Prior to that she worked for various radio, print and online titles, including Newstalk, Maximum Media and The Tuam Herald. Fiona’s media career began in her native Mayo when she joined Midwest Radio. She is the maker of a number of radio documentaries, funded by the Broadcasting Authority of Ireland (BAI). She has also availed of the Simon Cumbers Media Fund to report on development issues supported by Irish Aid in Haiti. She won a Justice Media Award for a short radio series on the work of Bedford Row Project, which supports prisoners and families in the Mid-West. Fiona also teaches on the Journalism programmes at NUI Galway. If you have a story and would like to get in touch with Fiona you can email her at fmcgarry@clarechampion.ie or telephone 065 6864146.
Previous North Clare woman’s ‘living nightmare’ in crumbling home
Next Well-known livestock haulier calls it a day after almost 50 years