Home » News » Public demonstration to be held in Kilrush 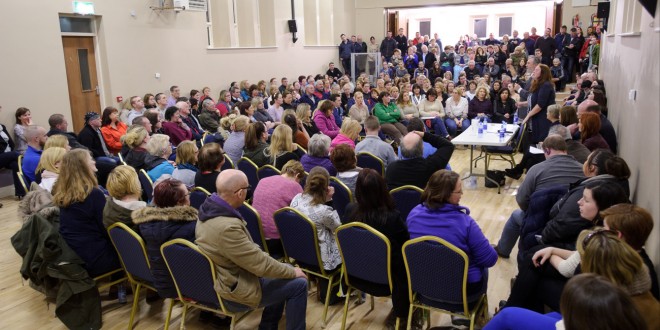 A full house at the emergency meeting called by the West Clare Family Resource Centre which was held last week in Kilrush. Photograph by John Kelly.

Public demonstration to be held in Kilrush

A public demonstration relating to the shock closure of six childcare centres in West Clare and the subsequent loss of 53 jobs, will take place in Kilrush town square on Wednesday (February 24) at 12.30pm. News of the closures were relayed to staff by text message, following a West Clare Early Years board meeting, on February 13.
In a statement to The Clare Champion, parents and former staff of West Clare Early Years outlined their reasons for the demonstration, which will be held two days before the 2016 General Election.
“We the parents and former staff of West Clare Early Years have been devastated by the closure of the childcare facilities in West Clare. Fifty three workers and 400 families have been affected by the closures. The parents and staff met with Pobal last week at which time we were assured that everything that could be done would be done to re-open the facilities urgently. To date we still have no alternative in place. As a result we the community have organised a public demonstration,” the statement read.
“We are calling on all of the community to come and join us to support us in getting this vital service reinstated. Our public representatives, who attended the public meeting on the February 15, have not been in touch since with the exception of Councillor Ian Lynch. The Taoiseach was in Clare over the weekend and made no reference to the crisis we are facing. We are aware that there are discussions on-going today. However despite assurances we have not received a response,” the statement added.
It was signed by Sorcha Daly, Claire Clarke, Maddy Dunne, Caríosa O’Connor, Anne Rodgers and Mary Bolton of the Childcare Community Action Group.

Meanwhile on Wednesday afternoon Pobal advised the Childcare Community Action Committee that they were in talks with a second group, who are interested in taking over the childcare centres in West Clare.

“We have just been advised that the group have decided that they are not in a position to take over the centres. Pobal have not given us an adequate reason as to why these parties who were initially interested have now said no. We as a community are devastated. We have no idea what we are going to do for childcare. We have no options left. At this point the government need to come up with an actual solution,” the Childcare Community Action Committee stated.