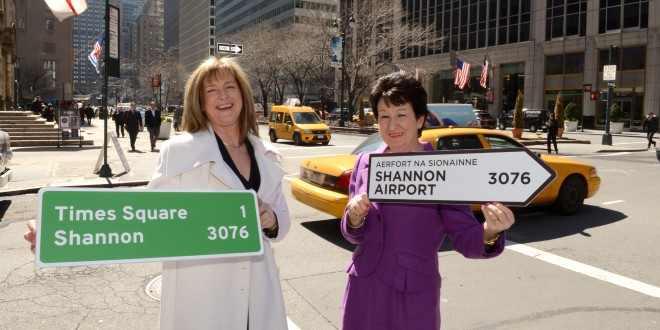 Promoting Shannon in the Big Apple

SHANNON Airport representatives were in New York to promote Aer Lingus’ first year round service to the Big Apple since 2009.
Shannon Airport Chair Rose Hynes and Marketing Manager Marie Slattery led the delegation and during the four-day visit they held meetings with New York based business interests and investors with regard to the activities of the wider Shannon Group.

Ms Hynes said that the American market for services into the West of Ireland is heating up. “We have had a tremendous response from the trade, which is our key audience this week, as well as US media. There is a particular demand from the US for services into the western half of the country and Shannon because of the uniqueness of the product we have.

“Shannon is, of course, the only airport on the entire Atlantic coast with direct access from the US and we are delighted to have strengthened the services this year again. The Wild Atlantic Way is also generating considerable interest. It will be the longest coastal driving route in the world and that’s the type of product the discerning US market demands.”

Aer Lingus will add 31,000 seats on its transatlantic services in 2014, a significant increase in capacity over last year when it operated seven flights a week before Shannon and the US compared to 13 flights a week this year.

Tourism Ireland’s head of North America Alison Metcalfe said that connectivity between this region and America has improved dramatically. “The Shannon region has extensive links with the US, forged over generations, and it has been a major gateway to the West of Ireland for US visitors over the years.

“Getting to the Shannon region has never been easier with great value non stop flights from cities such as New York, Chicago, Boston and Philadelphia.”