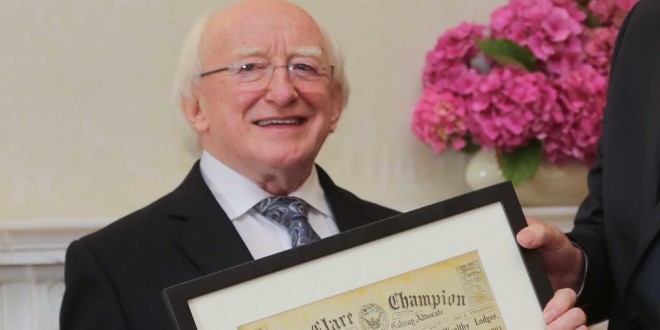 President’s praise for A Rising Tide

THE Clare Champion’s recent All-Ireland hurling final supplement, A Rising Tide, has received a ringing endorsement from none other than the President of Ireland, Michael D Higgins.

The President’s praise for the production came at an awards ceremony in Áras an Uachtaráin last week for the inaugural Get-Involved Community Get Involved campaign, organised by the National Newspapers of Ireland (NNI) Local and Regional and the Regional Newspapers and Printers Association of Ireland (RNPAI). Broadcaster and environmentalist, Duncan Stewart chaired the judging panel for the competition.

An avid sports fan, President Higgins made special mention of the Clare hurlers and commented that The Clare Champion supplement, A Rising Tide, was the best he’s seen but he had only managed to get halfway though it.

He received an appropriate reminder of his cradle days, when he was presented with a framed copy of The Clare Champion front page for the day of his birth in April 1941. Mr Frank Mulrennan of Celtic Media made the presentation, in the absence of Mr John Galvin, managing director of The Clare Champion.

Born in Limerick, President Higgins was reared from a young age in Ballycar, Newmarket-on-Fergus and attended the local national school and St Flannan’s College in Ennis. The weekly Champion was part and parcel of his formative years and during his political career as a senator and TD, he fully understood the importance of the regional press.

After President Higgins and his wife, Sabina met representatives of 22 participating projects, he spoke about how people around Ireland always shorten the name of their local newspaper.

“I don’t think I’ve ever heard a newspaper being called its name in full. People always shorten them. That indicates a kind of intimacy and authenticity, a connection between the act of newspaper coverage and the reader.

“In relation to the media locally and the many changes that have taken place, particularly within different forms of the media, regional newspapers are still an essential part, and an important tool in ensuring the events and issues, which are important to members of the local communities, are highlighted, debated and where possible acted upon. It’s a very important tool for participation.”

Mr Johnnie O’Hanlon, director at the Regional Newspapers and Printers Association of Ireland welcomed President Higgins’ comments. “The purpose of this special initiative is to highlight how communities can come together in unison for the betterment of their community. For well over a century now our newspapers have acted as a ‘call to arms’ to seek better communities, whether during famine times, war or as recently through recession,” he said. 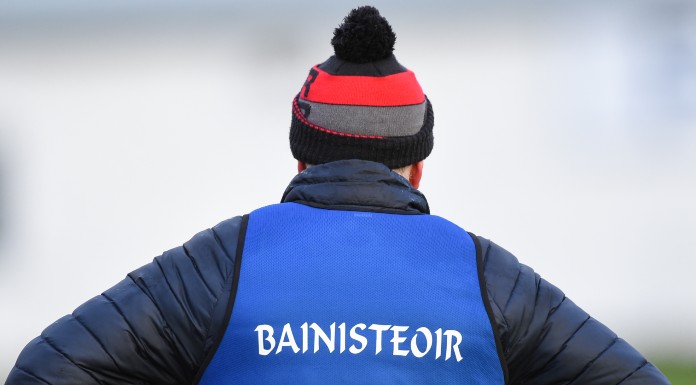 AS the curtain raises on another national league campaign for Clare, manager Brian Lohan insists …