Home » Lifestyle » Positivity in the face of uncertainty 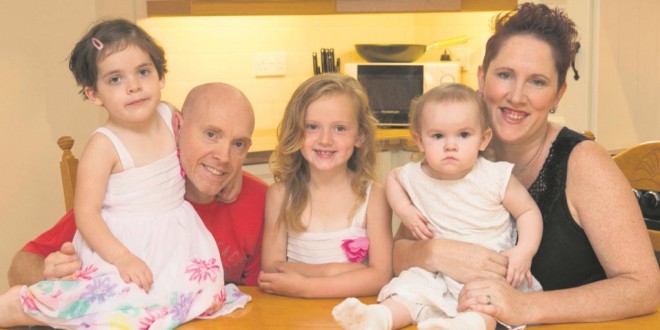 Frankie and Siobhan Lundy with their daughters Ava, Emily and Olivia.

Positivity in the face of uncertainty

“I could go away and crawl into a corner and let it roll me over, or I can stand up and say no way, Jose”. These are the inspirational words of Frankie Lundy who, two and a half years ago, was diagnosed with the rare Huntington’s Disease.

Speaking to The Clare Champion recently, Frankie and his wife Siobhan talked openly and honestly about the affect the condition has had on their family and their efforts to raise awareness.

Originally from Belfast, 51-year-old Frankie has lived in Ennis for over a decade, having previously lived in Shannon. A former musician, the Lundy name is widely known in music circles with Frankie playing drums for a number of well-known bands.

Huntington’s Disease is a hereditary disorder that causes progressive deterioration of the physical, cognitive and emotional self. Most people with HD develop symptoms between the ages of 30 and 50, with symptoms varying from person to person.

A self confessed ‘fidget’ Frankie had no idea that this was one of the first signs of the condition. “When I’d be playing, people would come up to me thinking I was on something, which I wasn’t,” he recalled. Siobhan added, “Over the years it got a little bit worse and worse. People would be coming up asking him if he had got anything. It was horrible because Frankie didn’t realise he was moving or any of these things. Because he had moved to Ennis, his family wouldn’t see him everyday so they noticed it more.  So, about three and a half years ago we started trying to figure out what was wrong.”

Exhaustive tests were carried out on Frankie to determine the cause before he was sent for a blood test for Huntington’s. When they received the results, Siobhan was pregnant with the couple’s third child. “The hospital rang us up a few days before to tell us to come in for the results. A half an hour later, they said you might want to bring someone in with you,” Siobhan remembered.

Frankie went on, “After that I went to see Dr John O’Mahony in the day hospital in Ennis. I said I was terrified and I always remember he said to me ‘what’s the worst that can happen’. I said, ‘that they tell me I have it’. He rightly said, that’s not the worst. They could tell you you have a brain tumour and you could be dead tomorrow. That’s the worst.”

He describes the moment he received his diagnosis, saying he was “gutted”. Siobhan continued, “We were given an A4 sheet saying he tested positive and information about the Huntington’s Disease Association. That was it, you have Huntington’s, now go figure it out for yourself. We knew he was being tested for it but we didn’t know too much about it. We didn’t want to look up too much because we didn’t want to put the fear of God into us and everything else was coming back clear.”

Along with dealing with his own diagnosis, because Huntington’s is hereditary, there is a strong chance that Frankie’s children will also develop the condition. As well as his three young children with Siobhan, Frankie has two other children from a previous marriage.

“Unfortunately its 50/50 for every child to get it. They can’t get tested until they are 18, so we are pretty much trying to forget about it from their side,” Siobhan said.

Frankie explained that people with Huntington’s are affected in many different ways.

“Walking is very hard for me and I sometimes stumble a bit and I have difficulty swallowing. The thing with this is next year I could be in a wheelchair, or I could be just like this for the next ten years. Depression is also a big part of Huntington’s, people who have it are really susceptible to it.”

When asked what effect the condition has had on her family, Siobhan, speaking from the heart, said, “It’s made it difficult. We only got married five years ago, so it’s like the family we had and planned has changed now. Because you’re never quite sure what’s coming in the future, you try your best to put it to the back of your mind. But because you never know what’s going to happen, it’s tough going.”

Current treatment methods for Huntington’s are limited. Siobhan added, “They can try and treat the symptoms but there is nothing to actually treat Huntington’s itself. Frankie’s tried a couple of different tablets for the movements but, in all honesty, while they are the most obvious thing they are the least hassle.” At the moment, he is on ten tablets a day, a mix of anti-depressants and anti-anxiety medication. Great strides are being made in researching the condition, with Siobhan hopeful that one treatment currently being investigated could make a big difference.

She explained, “The neurologist Dr Ed Wild has spoken about a new thing that’s looking fairly hopeful. It would be helpful a little bit for Frankie, but it would be brilliant for the next generation if, God forbid, they are diagnosed. It’s called gene silencing. The one good thing about Huntington’s is it’s a specific gene. So they can pinpoint it and what they are trying to do for want of a better word is freeze the gene. It’s hope.”

The pair said they have received great support from the Huntington’s Disease Association of Ireland and the Irish Wheelchair Association.

“The Huntington’s Association are brilliant, they do great work but there needs to be more here for people with Huntington’s. If there was a centre here in the South of Ireland that would be a great help,” said Frankie.

Siobhan added, “Every year, families are invited to Cuisle in Roscommon that’s run by the IWA, which is brilliant. The kids all loved it and it was great to meet with other families dealing with Huntington’s.” They also attended a presidential garden party at the Áras.

The couple want to raise awareness of Huntington’s and Frankie has been involved in regular fundraising. They have appeared on television and are hoping to do even more to get their message across. Frankie has set up a Facebook page (Frankie Lundy) with details about the condition and fundraisers.

He added, “I’ve always been an active person and we are always trying to keep going. If there are any HD things happening in Dublin, we try and get there for them. We’ve had a few fundraisers organised through my contacts with bands and I’ve a Facebook page set up. If I can do a little bit to help, to go out there and shout about this thing. They way I look at it, genuinely, is I could go away and crawl into a corner and let it roll me over, or I can stand up and say no way, Jose”.

Siobhan agrees saying, “Nobody seems to have heard of this. It’s a fairly rare thing, there are about 750 people in Ireland diagnosed with it. But when you think about it, all their kids are 50/50 of getting it and it could all blow up and nobody has a clue what the hell it is.”

Siobhan said, like many families affected with disability, she is concerned about the upcoming budget. “They seem to be cutting everything that has to do with helping people. We have a medical card, but I’m a bit worried that they could suddenly turn around and take it away.”

They concluded by saying the family are determined not to dwell on the negative but to continue to remain positive into the future, not just for themselves, but for their kids.

“The way I look at it is no family is perfect, there’s always something. You just have to get on with it,” said Frankie.