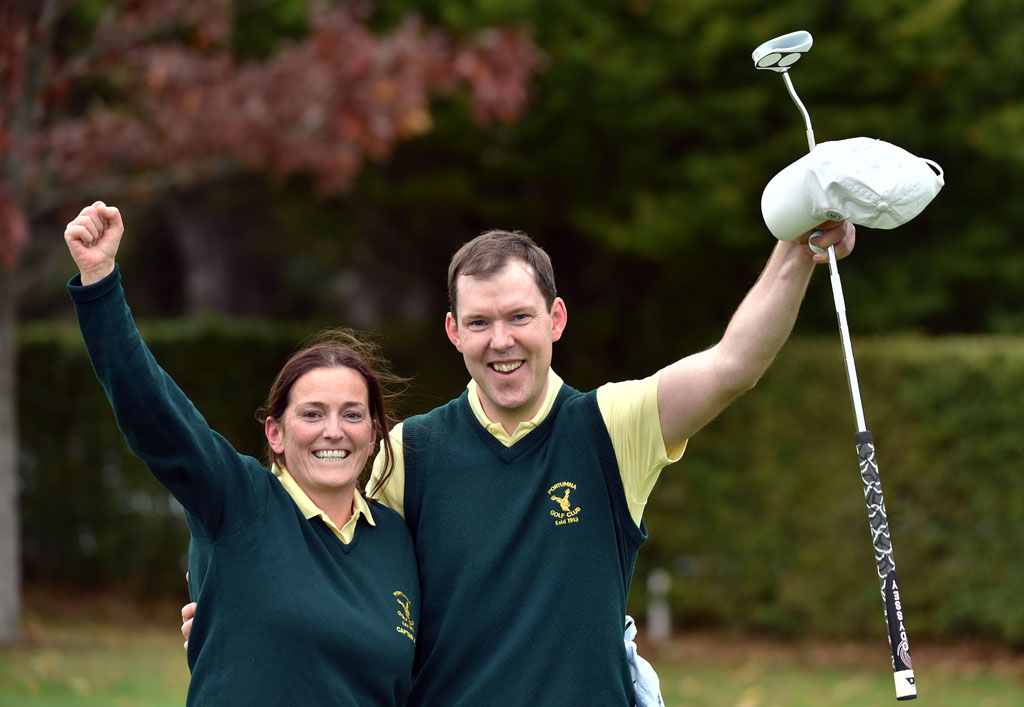 Mary Mc Elroy and Damien Burke (Portumna) after winning the crucial match on the 20th green for victory in the final of the 2018 Irish Mixed Foursomes at Milltown Golf Club. Picture by Pat Cashman

Portumna landed the Irish Mixed Foursomes in dramatic fashion when Damien Burke holed the winning putt at the second extra hole.
Burke partnered Mary McElroy to victory in the decisive match, which went to the 20th, sinking a crucial five-footer to seal the winning point against the Ulster champions, Ballybofey & Stranorlar for a 3-2 win.

This was a second green pennant for the club, who had previously won the Irish Mixed Foursomes at Bandon in 2009

The East Clare ladies team, managed by Siobhan Shanahan, were runners up to Gort in the final of the Burren Cup in Glenlo Abbey last Sunday.

This result, together with their fourth place in the finals of the Mary McKenna Cup, rounds off a very successful and enjoyable year of competitions for the Ladies Club.

In the ladies section the winner of the singles was Mary McMahon 20) with 33 points.

In the club scramble, the winners with 77 points were Johnny Kearse, Tom Gallery, Eddie Glenny and Andrew McGloin from Tim Kelly, Ann Casey and Ken Morrissey with 72 points.

Gerry Glynn, playing off a 22 handicap, returned 43 points to win the weekend singles Stableford competition in Gort. Second was Sean McNamara (18) with 40 points with Naoto Nishio (20) third with 39 points.

Tim Devenney, who plays off 5, carded the best gross with 30points.

In the ladies section, Maura Hanrahan, who plays off 14, returned a 75nett to win the Rockfield Cup from Jane Joyce (13) who had a 77 nett.

In the open parent and child competition in Shannon, the winners were Gerry O’Brien (19) and Neil O’Brien (5) with 44 points. They had a better back nine than Gary Purtill (6) and Thomas Purtill (9).

In the modified scramble, brother and past captains Aidan and Karl Moloney teamed up with Iggy Cullen and Finbar Keyes to return a winning score of 101 points.

In the nine hole midweek competition, Dereck McCoy was the winner with 20 points from Eddie King nwith 19 points.

Last week’s com-petition was a v-par format for the Fred Falnagan Memorial. The winner was Cyril O’Neill 3 up from Mervyn Frazer 2 up and Jimmy McManus 2 up. The over 18 category was won by John O’Neill even.

In the weekend 18 hole competition Ellie Cotgreave won from Katrina O’Neill and both had 36 points. Third was Lisa McKnight with 34 points.

The Fr Tuohy Memorial Cup open competition was played last week and with winner of the ladies’ section was Geraldine Reddan from Maura O’Boyle.

However, there was consolation for Maura when she team up with Jack Beaky to win the club’s mixed match polay, defeating Mary McNamara and Martin Glenny in the final.

In the weekly singles Stableford competition the top three places were filled by Eileen Murrihy, Karen White and Ann White.