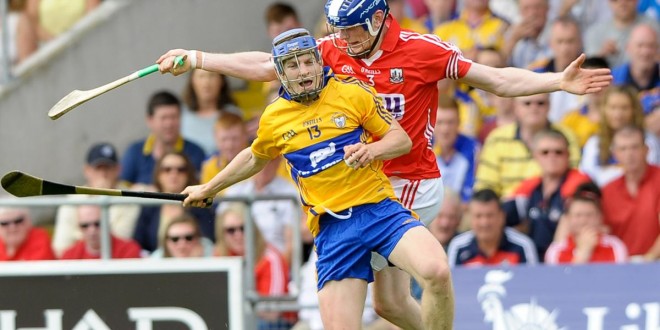 Podge Collins, pictured here in action in the All-Ireland final in 2013, is back in the starting line up for Clare. . Photograph by John Kelly

Dual player Podge Collins is back in the Clare senior hurling starting line up and will line out against Kilkenny in Sunday’s Allianz hurling league semi-final.

Eleven months after suffering a cruciate knee injury and two years after he last played senior hurling for Clare, the Cratloe man has been named at corner forward to face the All-Ireland champions.

Collins’ return is one of three changes in personnell from the side which started against Tipperary in the quarter final. Oisin O’ Brien returnes at corner back while David Fitzgerald is also in from the start. They replace Ciaran O’Doherty, Conor Ryan, who is ruled out due to injury, and Bobby Duggan.

Tony Kelly will, it is understood be amongst the substitutes along with Colin Ryan.

Collins was one of the stars in Clare’s All-Ireland win in2013 and was short listed for the player of the year award. Last year, Clare manager David Fitzgerald opted not to include dual players and as Collins was part of the county senior football panel, he was omitted from the hurling squad

When the team lines up at the throw in againt Kilkenny, there are expected to be a number of positional changes that will include Pat O’Connor going to full back, Brendan Bugler moving to centre back and David Reidy switching to midfield

Previous CEO has regret over town council abolition
Next From the Burren to Belarus, 30 years after Chernobyl disaster