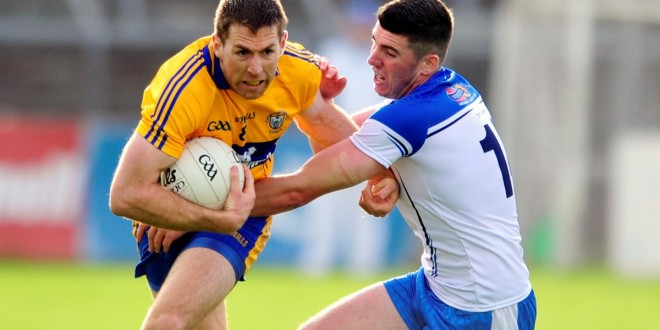 Gary Brennan of Clare holds off the challenge of Paul Whyte. Photograph by Declan Monaghan

Podge Collins to start for footballers

THE Clare senior football team to play Kerry in Sunday’s Munster semi-final in Cusack Park has been named. The only change to the starting 15 from last Saturday’s semi-final replay win over Waterford is the return of Podge Collins at the expense of Barry Hartnett. Collins will start at centre-forward with Enda Coughlan wearing the number 15 jersey. Shane Brennan will start alongside his brother Gary at midfield while Coolmeen’s Cathal O’Connor underwent a fitness test at training in Cusack Park on Friday night and it is expected that he will be part of the match day panel. Sunday’s semi-final throws in at 3.30pm. The Clare v Kerry junior football semi-final starts at 1.30pm at the same venue.

The Clare senior team is as follows: