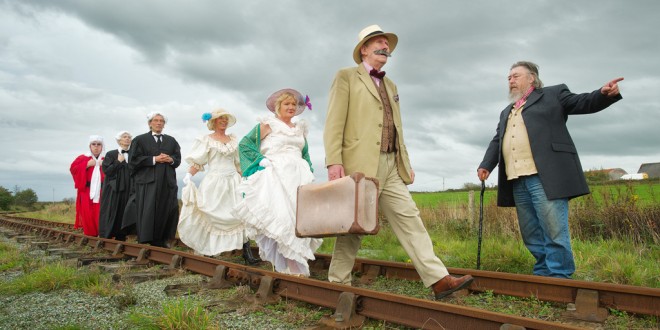 On the right track: Members of the Junk Shun Productions in their Laughter In Court costumes at a photocall in Moyasta Junction to promote the Kilkee Playwright Festival, which runs on November 1 and 2. From front to rear; Richard Gair, manager West Clare railway, as Mr Sullivan, Charles Clancy as Percy French, Theresa Hartigan and Margaret Whelan as Miss Malone A and Miss Malone B, Paul Clegg as Clerk, Brian Comerford as QC Murphy, and Jim McNamara as Judge Kelly. Photograph by John Kelly

THE third annual Kilkee Playwright Festival takes place from Friday, November 1 to Saturday, November 2 with some new and exciting events being added to this year’s line-up.

Organised by Cultúrlann Sweeney and Banner Productions, this year’s programme is more far-reaching and varied than ever with performances from Cork, Galway and West Clare, as well as a one-day playwright workshop.

The festival will kick off at 8pm in Cultúrlann Sweeney with The Great Hunger by Cork-based Theatre Makers Ltd. This one-man play is performed and adapted by Jack Healy from Patrick Kavanagh’s epic poem that deals with the trials and tribulations of its central protagonist, Patrick Maguire, a small farmer in post-Treaty Ireland.

Maguire fails to seize day-after-passing-day, as he watches in despair as his life edge closer and closer to an unconsummated conclusion. On his “headland of carrots and cabbage” he dreams of an idyll of marriage and children and yet boasts to his friends of his mastery in avoiding every “net spread in the gap of experience”.

His life is an endless cycle of feeding the hens, boiling the kettle, lighting the fire and giving the cows their hay, with only the monotonous certainty of Sunday mass or the meagre offerings of the crossroads to look forward to, by way of social life. Yet sometimes, when he is on the land, he has the most profound, life-giving experience of the spiritual in nature.

“Kavanagh masterfully mediates all of this – Patrick Maguire and his world – through a beautiful tapestry of words and images. Jack Healy has been described as revelling in the earthy and lyrical language of Patrick Kavanagh’s epic poem and put in a fine performance as the protagonist. Directed by Ger FitzGibbon, former head of Drama and Theatre Studies at UCC, who most recently was consultant director of Becket’s Krapp’s Last Tape and co-director of Frank McGuiness’ Mary and Lizzie, both at the Granary Theatre in Cork,” Siobhán Mulcahy, Clare Arts Officer and event organiser said.

On the Saturday of the festival Jack Healy will also run a one-day playwright workshop in Cultúrlann Sweeney. It will focus on the actual structures of writing a play, how to go about it and how to develop characters, among other things.

This one-act court room comedy is based on the court reports taken when Percy French sued the West Clare Railway for failing to get him to Kilkee on time to perform at The Old Moore’s. The incident led to Percy writing Are Ye Right There Michael, Are Ye Right? Directed by Jenny Bassett the cast includes Jim McNamara as Judge Kelly, Sean Dunleavy as QC Cullinan, Brian Comerford as QC Murphy, Paul Clegg as Clerk, Clarles Clancy as Percy French, Richard Gair as the manager of West Clare Railway Mr Sullivan, Stephan Whelan as Mr Hopkins (engineer at West Clare Railway), Margaret Whelan and Theresa Hartigan as Miss Malone A and Miss Malone B.

The evening will also feature Galway writer, director and actor Margaretta D’Arcy, who will be performing her devised work Conversations with the State. Margaretta has been a regular performer at the festival and performed Tea @ 4 with George Moore, with her late husband and great playwright John Arden.

“The festival is delighted to have Margaretta back in Kilkee, who has gained quite a large following over the years,” Ms Mulcahy outlined.

Ms Mulcahy will be launching the festival on the Friday evening, and will be followed by the Theatre Makers Ltd performance of The Great Hunger.

Tickets are available at Cultúrlann Sweeney or on the night, while workshop places are limited and need to be booked from 089 4967767.