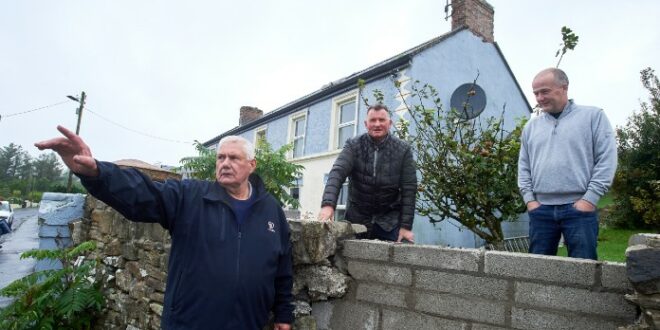 AN AMBUSH in the village of Feakle in 1920 is to be commemorated with the unveiling of a plaque at the place where it happened.

The ambush, which took place on October 7, almost 100 years ago, involved members of the Sixth Battalion of the East Clare Brigade of the IRA. The attack on six members of the Royal Irish Constabulary (RIC) led to the burning of a number of homes and business premises in Feakle by way of reprisal.

Local historian and Chairperson of the Feakle Commemorative Group Pat Flynn has researched the event in detail, combing military archives and consulting secondary sources, and says the ambush is a significant incident in The War of Independence in Clare.

“Tommo Tuohy was the man in charge of the ambush, having been deeply involved in the republican struggle, even as far back as 1916,” said Mr Flynn. “The East Clare Brigade were very strong and determined to make a stand for freedom. In the lead up to the event, the local postman had been ambushed and the post for the RIC barracks had been stolen. That prompted the RIC to go to the post office to collect the mail themselves. On the day of the ambush, six armed members of the RIC marched to the post office in groups of two. There were IRA men in position in groups of four or five at the graveyard, the post office, Nugent’s house and Keating’s Pub. There could have been as many as 35 IRA members in total involved in the ambush with support from members of Cumann na mBan. Shots were fired from the upstairs window of Nugent’s house and they fatally wounded two RIC men. Four escaped.”

Military records identify those who were killed as Constable William Stanley, who died at the scene, and Sergeant Francis Doherty who died later from his injuries. The last rites were administered by the curate Fr O’Reilly. Despite their efforts to protect the village, immediately after the ambush, a number of houses were set alight in reprisal attacks on premises which included the post office itself, Nugents’s, the priest’s house and the homes of the Considines and the O’Briens.

“We have no records of anyone being injured in the reprisals,” said Mr Flynn. “People would have managed to get away, especially families with children, and to get to safety. In the days that followed, there were several more homes set on fire, including Kelly’s, McNamara’s and Rochford’s. The memory of these events was certainly very strong among previous generations.”

Councillor Pat Hayes is another member of the commemorative committee, along with local couple Carol Torpey and Brian McMahon, the postmaster. He noted that the events are planned to remember the centenary of the ambush are not about celebrating the killings. “There was a strong republican tradition in North East Clare. That’s why people took a stand in the way that they did. What we want to do is remember the cause and those involved in it,” Councillor Hayes said. “The plaque will be in Irish and simply state that this is place where the ambush happened. Tomás MacConmara will read an oration We’ll have a piper from Tulla and a number of local musicians performing. Things will be kept simple because of the pandemic. We will also bring out a commemorative booklet and would be hoping to inform and educate people about what happened at what must have been a very tense time in Ireland. We are delighted to have Pat [Flynn] taking on the role of researching the ambush and leading the commemoration plan. One hundred years is not that long, these events are not that far removed from today’s world. Our aim is not to make this a political thing, it is a historic issue.”

Fiona McGarry joined The Clare Champion as a reporter after a four-year stint as producer of Morning Focus on Clare FM. Prior to that she worked for various radio, print and online titles, including Newstalk, Maximum Media and The Tuam Herald. Fiona’s media career began in her native Mayo when she joined Midwest Radio. She is the maker of a number of radio documentaries, funded by the Broadcasting Authority of Ireland (BAI). She has also availed of the Simon Cumbers Media Fund to report on development issues supported by Irish Aid in Haiti. She won a Justice Media Award for a short radio series on the work of Bedford Row Project, which supports prisoners and families in the Mid-West. Fiona also teaches on the Journalism programmes at NUI Galway. If you have a story and would like to get in touch with Fiona you can email her at fmcgarry@clarechampion.ie or telephone 065 6864146.
Previous Political answers sought to Clare ‘pyrite’ issues
Next Dramatic lighting installation for Culture Night in Tulla