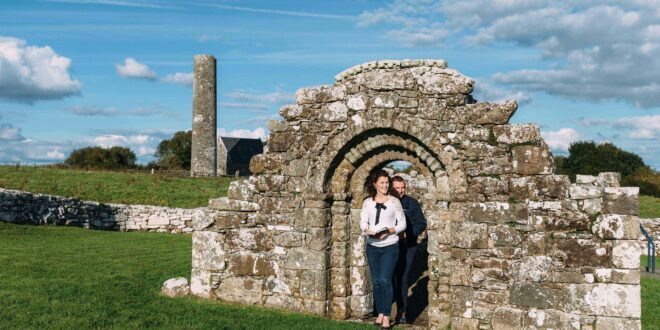 THE eagerly-anticipated project to create a visitor centre in Mountshannon as part of the Inis Cealtra Visitor Experience has reached a major milestone, with plans unveiled to renovate an iconic local building.

The project, which is being led by the Tourism Department unit of the local authority, is tipped to be the ‘Jewel of Lough Derg,’ and has long been regarded as key to rebalancing tourism between the east and west of the county.

Having taken 41 acres on Holy Island into public ownership in 2015, Clare County Council has submitted a Part 8 planning application for The Old Rectory building overlooking Mountshannon Harbour and Lough Derg. The application outlines how a mainland visitor centre will be developed to interpret the seventh century monastic site and its surrounds.

“The delivery of the proposed Inis Cealtra visitor centre facility on the shores of Lough Derg will introduce this iconic tourism attraction to a wider audience,” said Cathaoirleach of Killaloe Municipal District, Councillor Pat Hayes. “It will further raise the profile of East Clare as an attractive visitor destination at a time when the domestic tourism sector is preparing for the reopening of the wider economy, and it also will complement the success of the Lough Derg Blueway which has delivered significant economic benefit for communities around the lake since its launch in 2018. The elected members of Killaloe Municipal District are very supportive of this project.”

Local councillor Pat Burke said the news was being warmly received in Mountshannon. “It’s brilliant news and I’ve been getting lots of calls from people who saw the planning notice in The Champion,” he said. “I couldn’t welcome it enough and people are delighted that the building is now in public ownership and will be put to such good use. People have been waiting for progress and the fact that the council has been working diligently behind the scenes is a huge credit to them. It’s extremely good news for the area.”

Cathaoirleach of Clare County Council, Councillor Mary Howard said the development was particularly welcome at a time of huge challenges for the tourism sector.

“This project has been supported by government with an RRDF (Rural Regeneration & Development Fund) Category 2 grant for the design and feasibility research stage,” he said. “As we move to the next stage, I acknowledge that much time and effort has been invested into the preparation of a detailed grant application in order to secure funding for the development of the project.

Paddy Mathews, Head of Ireland’s Hidden Heartlands, commented, “The new visitor centre and facilities to service Inis Cealtra are a very exciting development on Lough Derg which will help further to establish the lake as a must-see visitor destination. It will provide visitors with a significantly enhanced experience and will ensure the sustainable development of tourism in the region for the whole community.”

Éanna Rowe, Regional Manager of Waterways Ireland, described the proposed development as “a most welcome and extremely important tourism and navigational addition to the Shannon in general and Lough Derg in particular.”

“As part of the collaboration with other agencies, the elected members of Killaloe Municipal District received a briefing on the project recently. The project has also involved close engagement with Mountshannon Community Council,” he explained.

Scariff-based Deputy Michael McNamara said the area needs an iconic site to be promoted as successfully as the Cliffs of Moher. “Inis Cealtra is clearly that site for Lough Derg and the Lower Shannon and I am pleased to see that Clare County Council has acquired the site and is proposing to develop a visitor centre in Mountshannon because along with being an iconic site, Holy Island is also a national monument and a heritage site of international significance,” the Independent TD said. “Tourism development needs to be sustainable and protective of the island itself. That development can take place in the site acquired by the Council. The provision of such a facility would lift the streetscape of Mountshannon and provide employment there and across the wider community of Lough Derg and Lower Shannon.”

Still used as a burial ground, the ruins and buildings still standing on Holy Island date back to the seventh century, when the monastic site was established by St Caimin. Buildings on the island include a 24-metre-high round tower, an oratory, and several churches. The island lies close to the village of Mountshannon and is on the UNESCO World Heritage site tentative list, along with Clonmacnoise, Durrow, Glendalough, Kells and Monasterboice.

The Part 8 application is available to view on the planning section of Clarecoco.ie.

Fiona McGarry joined The Clare Champion as a reporter after a four-year stint as producer of Morning Focus on Clare FM. Prior to that she worked for various radio, print and online titles, including Newstalk, Maximum Media and The Tuam Herald. Fiona’s media career began in her native Mayo when she joined Midwest Radio. She is the maker of a number of radio documentaries, funded by the Broadcasting Authority of Ireland (BAI). She has also availed of the Simon Cumbers Media Fund to report on development issues supported by Irish Aid in Haiti. She won a Justice Media Award for a short radio series on the work of Bedford Row Project, which supports prisoners and families in the Mid-West. Fiona also teaches on the Journalism programmes at NUI Galway. If you have a story and would like to get in touch with Fiona you can email her at fmcgarry@clarechampion.ie or telephone 065 6864146.
Previous Clare records 16 new cases of Covid-19
Next 12 new cases in Clare brings 14-day incidence rate to 149