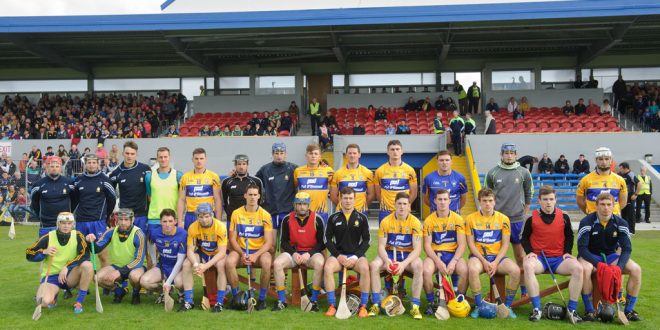 The Clare team in front of the new stand at Cucack Park before their All-Ireland Senior Championship qualifier game against Laois. Photograph by John Kelly.

Clare Marts had requested the council to delete any references to the relocation of Cusack Park to the subject site from the Draft Clare County Development Plan 2017-2023.

However, councillors took a different view and decided to include a resolution into the draft plan to facilitate the move, if this is sanctioned by Clare GAA in the future.

The council stated, “This opportunity site on the edge of the town has been zoned for mixed-used development and, given its location, it is particularly suited to facilitate the relocation of Cusack Park, should the need for a new stadium arise during the lifetime of this plan.

“Adequate lands have been zoned to also accommodate the necessary car, coach and bicycle parking on the site, the development of which will require the use of permeable surface, given its location within an area of flood risk,” the resolution stated.

Councillors also decided at a recent meeting to include additional land to the west of the mart building and zone this utilities. This was done to provide for extra car parking, due to the increase in the volume of traffic on mart days, which creates traffic safety issues on the road.

It was also decided to insert a pledge to try and secure the provision of a new link road off the motorway onto the Quin Road back into the plan.

Councillor Johnny Flynn has been campaigning for this new link road for years, in an effort to reduce the amount of heavy traffic from the Quin Road that is forced to travel back over the humpback bridge into the town to access the motorway.

In a submission drafted by HRA Planning on behalf of Clare Marts, the planning consultants considered that the proposed land use zoning and development objectives for the Clare Marts property, as set out in the Draft County Development Plan, fail to sufficiently accommodate and provide for the sustainable expansion of existing cooperative business.

It requested that they continue to operate and expand their existing activity and associated related uses on the existing site.

To facilitate such growth and expansion, they requested that limited additional zoning be afforded to the land. The cooperative also considered that limited zoning is required on both sides of the distributor road, to the east and west, in order to facilitate its sustainable delivery in a cost-efficient and pro-active manner.

Clare Marts Ltd submitted that the collective consideration of the draft land use zoning and development objectives applied to the property are likely to prejudice any future development and would present contradiction and gross uncertainty for potential investors.

It requested that the proposed open space zoning on the western extremity of the land be replaced with a mixed-use zoning to facilitate the continued operation and future expansion of the mart.

Acting chief executive officer, Ger Dollard stressed that any zoning and/or designation proposed on the site subject of this submission does not restrict the current use of the site as a mart.

Mr Dollard stated that the reference to Cusack Park is not prescriptive but facilitates the development of a new stadium, should the need for a new stadium arise. It is clearly stipulated that “any future development of the site will be dependent upon the relocation of the existing mart”.

Mr Dollard considered that any extension of additional zonings for more vulnerable uses, including mixed use and commercial, is not appropriate, having regard to its location in Flood Zone A.

“The infrastructure safeguard reflects the proposed link road from Clonroad to the Quin Road, which is part of an overall traffic management plan for the town to improve permeability and ease of movement, which I anticipate will be delivered in conjunction with any future development of the existing site of the mart.”

He recommended that an amendment should be made to the Ennis Settlement Map in the Draft Clare County Development Plan 2017-2023 from open space to utilities, to allow for an extension to the existing hard-standing for an additional car park for the mart, which was passed at the meeting.