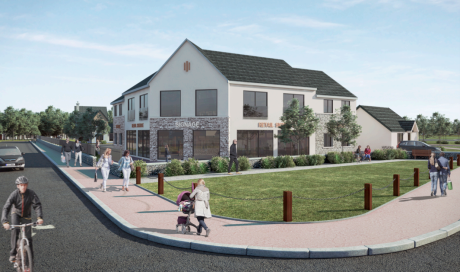 THE developers of a landmark site in Tulla have taken issue with a number of conditions imposed by county planners on a mixed-use residential, retail and commercial project proposed for one of the main approaches to the town.

The €4.5 million development is one of a number of housing projects in prospect for Tulla, but the company behind it is now asking the planning appeals board to remove two conditions, which it considers to be overly restrictive.

Woodhaven Developments Ltd. secured permission, last February, to develop the site of the former St Joseph’s Secondary School, which has been vacant for several years. The lands, which are just under three acres, and are owned by Woodhaven, are zoned for mixed use and identified by Clare County Council as an “opportunity site” on the outskirts of the town at the junction of Chapel Street and the R462.

The Ennis-based company is proposing to construct a mixed-use building with two shops and two offices, as well as a total of 17 homes. In a design statement submitted with its application, Woodhaven outlines its track record in significant housing developments in Clarecastle, Crusheen, Ennis and Newmarket-on-Fergus in recent times. It proposes to create, as part of the current project, “a landmark type building in order to mark a key entry to the town”, and estimates the creation of 23 jobs during the construction phase.

Among the 22 conditions stipulated by Clare County Council is the requirement that one of the proposed housing units be redesigned for use as a crèche, and that the shop and office units be completed before the homes are occupied. The local authority has also asked Woodhaven to provide it with details of the proposed occupiers of the retail and commercial units before the homes are occupied.

In its appeal to An Bórd Pleanála, Woodhaven is now seeking to have these conditions removed. The company contends that the requirement for a crèche was inserted into the schedule of conditions without consultation and with no evidence of the need for such a facility. It adds that the exact nature of the proposed crèche – in terms of the range of services it might provide – has not been specified, and that the unit proposed for alteration would not be large enough. Woodhaven suggests that one of the commercial units could potentially accommodate a crèche at a future date.

In correspondence with the appeals board, the company has also raised concerns over the linking of the time-frame for construction of the housing with that of the commercial element of the project.  It notes that the project is one of the first housing developments in Tulla since 2006/7, and that while its sales team reports demand from home-buyers, it hasn’t received the same level of interest in commercial properties. Woodhaven also draws the board’s attention to the number of vacant units in the area, particularly in the centre of Tulla. With regard to this condition, the company states that “we consider the inclusion of this condition without due consideration to its financial and practical implications, including the right by us to be heard prior to its insertion is not a fair procedure”.

In a submission responding to the developer’s appeal, Clare County Council has asked that the conditions be retained. The authority has underlined the fact that the site is zoned for mixed use. It also points out that while it was considering the application, it suggested the inclusion of a crèche when it sought Further Information from the developers. The local authority also contends that a crèche facility would be appropriate at the site, given it proximity to existing schools.

An Bórd Pleanála is due to make a decision on the appeal by July 17.

The issue of increasing the housing capacity of Tulla has been the subject of debate in recent times with Clare County Council approving a Part 8 application, earlier this month, to construct 25 social homes at Doonaun.TulT

Fiona McGarry joined The Clare Champion as a reporter after a four-year stint as producer of Morning Focus on Clare FM. Prior to that she worked for various radio, print and online titles, including Newstalk, Maximum Media and The Tuam Herald. Fiona’s media career began in her native Mayo when she joined Midwest Radio. She is the maker of a number of radio documentaries, funded by the Broadcasting Authority of Ireland (BAI). She has also availed of the Simon Cumbers Media Fund to report on development issues supported by Irish Aid in Haiti. She won a Justice Media Award for a short radio series on the work of Bedford Row Project, which supports prisoners and families in the Mid-West. Fiona also teaches on the Journalism programmes at NUI Galway. If you have a story and would like to get in touch with Fiona you can email her at fmcgarry@clarechampion.ie or telephone 065 6864146.
Previous Appeal for information on Old Military Barracks
Next Community spirit endures as virus forces changes to funerals